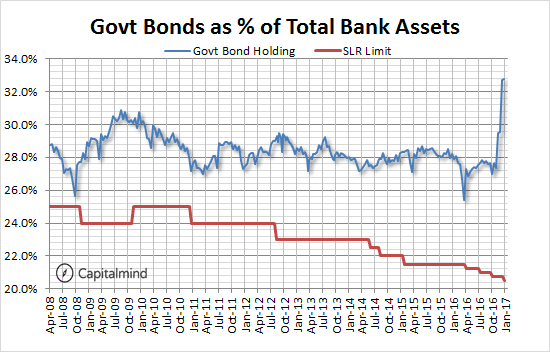 India’s Bank Credit Growth as a story is a depressing one. The credit numbers seem to show that credit growth is at 5.15% as of Jan 6, 2017. This is how bad it is – the worst it has ever been: 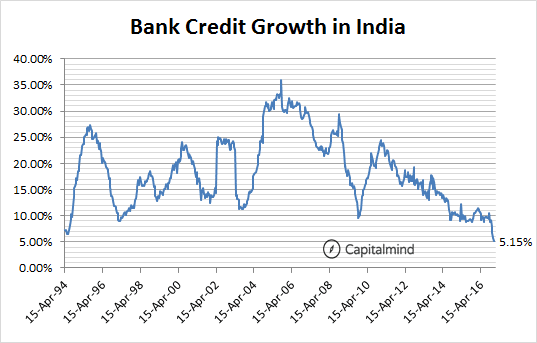 Largely, this is a result of demonetization which seems to have hurt growth substantially, at least from a bank credit side.
And because people have deposited all that money, banks have been using it to buy government bonds. Moreover, they get bonds from the RBI as part of the reverse Repo operation. And that has ensured that nearly 1/3rd of all banking money is stored in government bonds – the highest in a long time! (12 years to be more precise)

The SLR limit tells you how much banks MUST have in government bonds – and that limit has fallen now to 20.5%. And what banks have done is, well, something else. A lower SLR should help them lend less to the government and more to everyone else – but they’ve just lend to the government by loading up on bonds instead.
While we should have seen a “normalization” at some point, credit growth falling off a cliff and banks continuing to hoard government bonds tells us the situation isn’t getting better fast. Worse, Deposit growth has stopped – meaning, people are done with depositing money and they’re now starting to take it out (as currency). 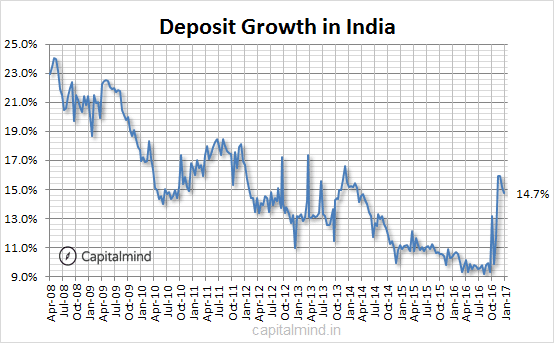 The macro looks a little weak for the banking system. Their gains in the December quarter are nearly all from Treasury (bond prices went up) which has also been reversing since December.
We still don’t know how much money’s come back, but current data seems to show that the benefit of “higher deposits” hasn’t accrued to the banking system. Lower credit growth and higher NPAs (nearly all banks have it higher so far) will hurt more.