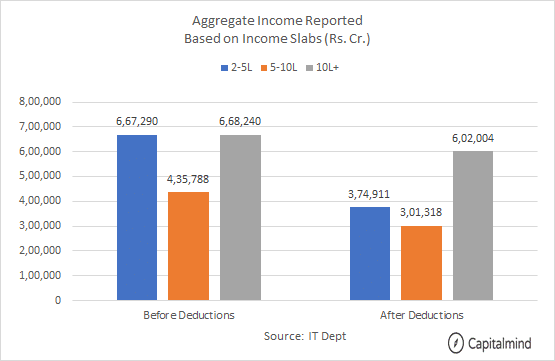 It was the season of Elections and Arun Jaitley was contesting from Amritsar. As politicians like to do, he went grandiose and said:

“Direct Tax should be reduced. If the Income Tax limit is raised from Rs. 2 lakhs to Rs. 5 lakhs, 3 crore people will save Rs. 24 crore which will lead to a small impact of 1 to 1.5 per cent of the National Tax Fund,”

The current tax structure is:

(The first slab increases to Rs. 300,000 for people above the age of 60, and there is no 10% slab for those more than 80 years old)
Our slabs are small and narrow: To give you a comparison, take the case of United States of America. The lowest slab starts at 10% rising all the way to 39.60% with 5 slabs in between. On purchasing power parity, the highest slab in United States of America for example would apply to those who earn an Income an equivalent of Rs. 7.5 million and higher.
Indian Income Tax rates aren’t very high, in comparison. In fact, if one were to take advantage of all the exemptions that the government provides, one doesn’t need to pay a Rupee of tax until you hit the 520,000 barrier if you structure it right.
One of the key layer of complexity is the large number of exemptions that are available. Take a look:

And if your Income after deductions is less than Rs. 5 lakh, remember that you get a rebate of an additional Rs. 2,000/- (u/s 87A).
So totally, you can get deductions of Rs. 250,000. If you make Rs. 520,000 and then invest / spend  Rs. 250,000 into the above deductibles, your tax is nil.
But what if the government removed some of the bigger exemptions and instead hiked the basic exemption limit? (We’ve noted this earlier too)

Making Up The Loss in Just 80C

In 2015, the government released granular data on Income tax. The last year for which this data is available is for the AY 2014 – 15 (FY 2013 – 14) and it provides for some interesting perspective.
It turns out that total taxable income before deductions saw the total income BEFORE deductions – added up – was about Rs. 667,000 cr. for those that reported it as less than Rs. 500,000 a year.
This dropped dramatically, to Rs. 375,000 cr., after deductions.

The insurance industry loves the tax subsidy, which is what keeps them afloat. There’s also ELSS funds set that takes a lot of money (10% of total Assets under Management in Equity oriented Plans) based on an 80C exemption. And then NSC, PPF and others as well – how do you encourage people to save longer term?
This could have big repercussions from the industry, even if it’s neutral for the government and beneficial for the taxpayer.

India should move to a retirement account system. You get an account where you can’t take money out until you retire. (If you do, penal taxes of 50% apply) You can use that account to invest in things – like stocks, mutual funds, PPF, NPS or insurance (non-term) products.
Whatever money you put in this account is not taxed. When you take it out after the age of 60, the amount is fully taxed.
You can sell one investment and buy another – there will be no capital gains tax either. You can shift from one type of investment to another. Only thing is that when you exit, the money is fully taxed as income.
Inheritance counts as an exit, so it can only be inherited by others if they paid full taxes on it.
A penal 50% on early exit means there is still liquidity, but at a higher cost. The 50% can be deducted at source.
A retirement account then allows individuals to have the same advantage as a mutual fund – where they can sell and reinvest gains without paying tax. Because the tax will be paid only eventually when one needs to use the money.
The retirement account needs a completely different management mechanism, and can be a combination of a demat account and a bank account. It will require some infrastructure to be created by SEBI and the IT department, so it won’t happen overnight.
This may sound like a great way to avoid tax completely, but it is a form of “deferred” tax. There will be an initial discomfort as people utilize it heavily, so there could be high limits, like Rs. 10 lakh per year per person. But in the longer term, any amount of such investment should be allowed, because this is a good way to create a longer term investment corpus.

We have argued that other tax-sops should go. So we should get rid of the housing interest income anomaly (you can pay a huge amount of interest on a loan taken for your second home, and offset it against your salary income to pay lower tax!). We shouldn’t have sops for housing that are in any way greater than sops for, say, clothes.
In general, removing sops and reducing effective tax rates can actually increase tax compliance because it’s not that complicated. And a retirement account would achieve the objective of ensuing that after retirement, one doesn’t go down to penury because of lack of savings which is the prime reason for the current incentives.