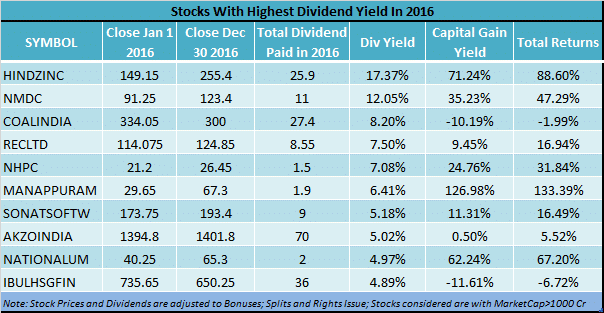 As part of our year-end summaries, we look at the top 10 dividend yield performers for 2016. You can catch our earlier series here:

2016 in Review: The Top 10 Large Cap Performers!
2016 in Review: Metals and Energy Best, Pharma and IT Worst
2015 in Review: Sector Moves Show Pharma Best, Metals Worst
2015 in Review: The Top 10 Large Cap Performers of the Year!
2015 in Review: The Top 10 Mid Cap Performers of the Year!
2016 had come to a screeching halt with demonetization and Nifty ended the year up just 3%. But there have been stocks that did really well in terms of paying out dividends to bolster that return.
However, 124 out of 602 firms (With market cap >1000 Crs) didn’t bother to pay out any dividend. The rest provided some relief for long term investors. While 5 of the top 10 dividend yielding companies are PSU’s, it shows a strong testament by PSU’s that they will be continuing the trend of dividend payout rather than going for an expansion or acquisition.
Government of India has come out with a new rule stating “Every state-run firm must pay a minimum dividend of 30% of its net profit or 5% of net worth, whichever is higher subject to the maximum dividend permitted under the law“. This has pushed PSU companies to either go for a buyback or a high dividend payout.
We compile you the list of the companies which have given the highest dividend for 2016 with its buy price being the closing price on 1st Jan 2016. Hindustan Zinc, NMDC and Coal India are the highest dividend payers.
Hindustan Zinc had been an awesome stock. It gave a total dividend of Rs 25.9 (including a special dividend of Rs 24). To add more to the smiles, the stock has moved up by 71.24%, taking the total returns from the stock to 88.6%. Rising Zinc prices have been a supporting factor for the price move. Hindzinc which used to be a PSU before a stake acquisition by Vedanta.
HindZinc is followed by NMDC, which is a PSU company. NMDC did a buyback, gave a 12.05% dividend yield and on top of that it has given capital returns of 35.23%. A minimum import price and uptrend in metal prices have given the stock an upmove.
Coal India, which gave a dividend yield of 8.20% for 2016, has not performed well, when we consider overall returns. Lower coal prices have pushed the stock price down. Coal India is down by 10% since Jan 1, 2016.

The below list gives the best performing stocks for 2016 considering total yield.
Manappuram has been exceptional. It has given a dividend yield of Rs 6.41% and capital gain of 126.98%. Taking the total returns of the stock to 133.39%. remember this stock was trading at Rs 100 before demonetization came in place. The stock is still among the top 10 mid cap performers, as well as among the top 10 highest dividend yielding company for 2016. 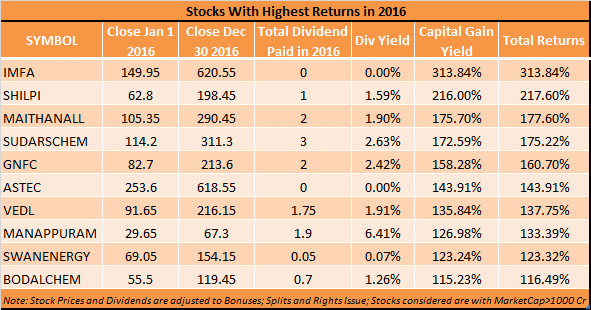 Please read our article on  Top 10 MidCap Performers for 2016 here.
What’s interesting about dividends? Long term holders will see dividends give considerable cash flow compared to their investments, sometimes enough to cover expenses. In 2007, if you had bought 1,000 shares of Hero Motocorp a Rs. 750, then, you invested Rs. 750,000. Since then would have received:

Forget how much your total return was – let’s assume you don’t want to sell the company’s shares at all. The main thing now is that your cash flow is higher, even if the stock didn’t move. Coal India, which has not even moved since its listing at Rs. 300 in 2011, has paid out Rs. 106 per share in dividends since. Investing for cash flow is a useful concept for those that see fixed income returns falling over the medium term.