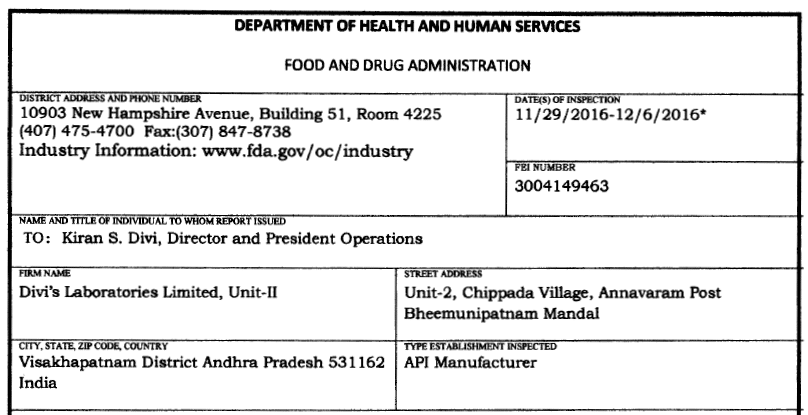 Here is our coverage of the Form 483 issued by the US FDA from the inspection of Divis Laboratories Unit-II located at Visakhapatnam. You can catch all our publications related to the Pharmaceutical Industry here.
This is not a recommendation to buy or sell the stock. Analyst and family do own some of the positions listed here. Please assume we are biased.

Divis Laboratories or DIVISLABS when established in the year 1990 focused on production of Active Pharma Ingredients (APIs) & Intermediates.

Divis Laboratories set up its second manufacturing facility at Visakhapatnam (Unit-II). in the year 2002 on a 350 acre site. The site has 14 multi purpose production blocks.
The Unit-II at Visakhapatnam was successfully inspected by the US FDA during November 2006, April 2009, July, 2012 and June, 2014.
Now here are the events that resulted in the stock falling to its 2 year low of Rs. 783/- (a bitter fall from Rs. 1136/-) in a span of 6 trading sessions.
7-Dec-16 (Wednesday) : While all the action was limited to Sun Pharma’s Halol and Mohali facility inspection (you can find the coverage here), there were 2 other inspections conducted by the US FDA one for Alkem and the other for Divis both of which got little attention from the stock market or from the investors as US FDA inspection, Receipt of Form 483 or a Warning Letter became the new norm for pharmaceutical companies (you can find our coverage of here).
Here is what Divis Laboratories informed in its exchange filing:

The Company’s Unit-II at Visakhapatnam, Andhra Pradesh has had an inspection by the US-FDA from November 29, 2016 to December 06, 2016. The Company have been issued a form 483 with 5 observations and these shall be responded within the time permitted.

Nothing major since no one other than a handful of FDA inspectors, Company officials knew the exact observations or the severity of the issues. 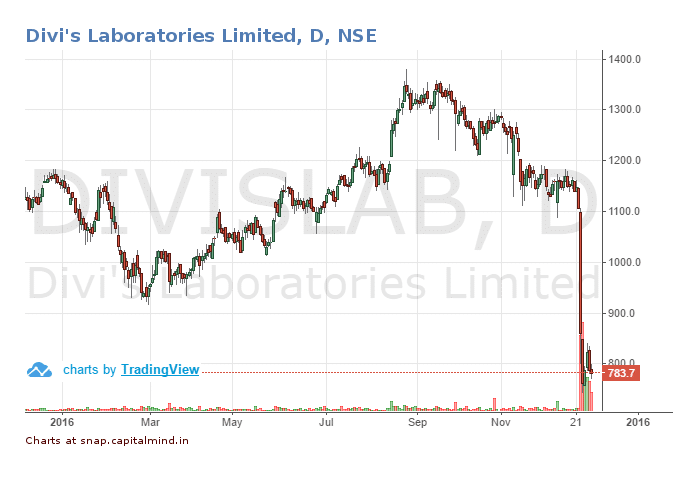 23-Dec-16 (Friday) : Another day heading into the weekend, the stock got bombed in the second half as Emkay Financial Services shared their views on the Form 483 with CNBC TV18. This meant the stock tanked 17% intra-day and hit its 52 week low price.
Here is what Emkay said:

Countering Emkay’s report, it took Divis more than 2 hours to come out with a clarification. The filing submitted to the exchange did not help much as it contained only legal jargons which meant absolutely no clarification on the points made by Emkay.
The company later went on to add:

Here is what analysts had to say:

The 483 observations received are all technical and procedural in nature; company is in process of filing its detailed response to the USFDA – Clarification  from the management is sentimentally positive; but Unit 2 ( Vizag facility) is a key facility for Divis as it contributes 50%+ to sales hence the stock is down by 18%+; we advise to avoid bottom fishing and await for more clarity on the development.

The observations were later made public by the same agency that broke the news,

Today 31-Dec-16, we were able to get our hands on the Form 483. Here is our understanding of the issues highlighted by the US FDA team.  You can download the Form 483 here:

Our understanding signifies Observation 2,3, and 4 as highly critical. Even if Divis is able to prove that it did not willfully destroy evidence and implement new system controls so as to maintain an audit trial, the US FDA will not be satisfied until the company displays that all products that are being exported to the US have been manufactured as per the FDA’s cGMP practices and effective investigation is performed in relation to the foreign particles that have been witnessed in multiple products imported into the United States.
Considering this facility contributes in the range of 30-50% of the company’s total revenues, its subsidiary in the US Divi’s Laboratories USA, Inc which was formed to distribute dietary supplements and pharmaceutical ingredients in North America may also come under heavy inspection.
Love it or hate it, do leave us with your reviews in the comment section below!