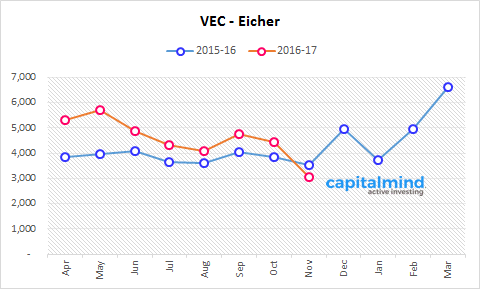 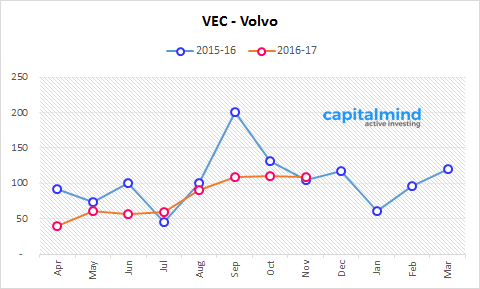 Joining hands 8 years ago (July 2008) with a clear roadmap to combine the strengths of technology and processes with the Indian partner’s skills of frugal engineering, the relationship between Eicher and Volvo led to the creation of its manufacturing powerhouse in Pithampur where both the trucks and engines are manufactured.
Though the relationship is still behind the forms of Tata Motors and Ashok Leyland, Eicher is making a gradual progress to be a front running player. In the second quarter of the year, the company’s truck crossed 6,000 units for the first time with a pace of over 2,000 units per month as it witnesses volumes in the Euro-6 base engines.
VECV reported a Revenue of Rs. 1,972 crores at a growth of 10.6% resulting in Profits after tax at Rs. 66 crore compared to Rs. 68 crores last year.

On the other front of its partnership, Volvo is taking part in an EU research project which involves replacing the cables in trucks with wireless sensors. The study is looking to reduce the amount of copper and plastic used in trucks.
Jonas Hagerskans, a development engineer at the Volvo Group said:

The savings could amount to a large number of hours, sometimes even days. In the factory, the cables are awkward to handle and time-consuming to fit in the right place. The wireless sensors are much simpler to install. The cables are also sensitive to dirt and rust and prone to faults. By replacing the cables with wireless sensors, it is possible to prevent all the potential cabling faults. When trucks come into the workshop for repairs, identifying faults in long cables that are difficult to access is very time-consuming.