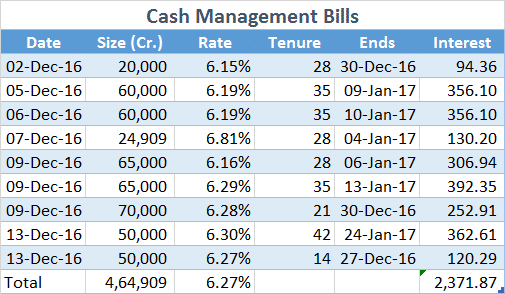 One of the costs of demonetization – and the cash withdrawal limits on banks – is that there’s a lot of money in the banking system now. This is because over 10 lakh crore has been deposited in bank accounts, but since you can only take out Rs. 24,000 per account per week (in cash), a lot of money still lies within bank accounts, most likely as savings account balances.
Now this money is temporary. Banks will see most of it flow out over time, as people withdraw it as cash – the economy will continue to have a substantial cash component because cash is easy, efficient and trustworthy for everyone. But what do banks do with this money while it’s lying with them?
When the demonetization drive started, banks placed as much cash as they could with the RBI. This was done through variable rate reverse repo auctions, and usually would be placed around 6.23%. Some of this was placed for a few days, some for longer (the RBI determines the tenure of such placements, before each auction).
But there’s a problem. The RBI really can’t pay this kind of interest on such large amounts of money. Paying it on about Rs. 500,000 cr. at 6.23% is about Rs. 2600 cr. per month, which could technically crimp the operational profits of the RBI substantially. (Most of the profit goes back to the government). And then, banks would take government securities as collateral and giving up that many government securities (Rs. 500,000 cr.) might have resulted in an issue – that the RBI doesn’t actually have that many securities to give!
The result has been the use of a Market Stabilization Scheme. This will mop up excess liquidity.
The government issues “cash management bills”. These are short term bonds issued by the government which banks buy, so it mops up the liquidity from banks. The money is then placed with the RBI and not used. (Why is it not used? If it’s used by the government, say to pay salaries, then the salary will be paid into a bank account. The money will come back into the banking system, which will again have this excess amount available which they don’t know what to do with!)
So the money needs to stay out of the banking system. The RBI keeps the money in a separate account and ensures the money is not used by the government. And the government pays the interest on this money to banks who have bought these securities.
This is what is a Market Stabilization Scheme (MSS). Basically there is too much liquidity in the system for some reason, and the government takes this liquidity out by paying interest on it. (Instead of the RBI doing it, it’s the government doing it – so the interest costs is borne by the government)

Was there an MSS earlier?

Around 2007, a deluge of cash was created in the system because foreign investors rushed to India. They sold their dollars and bought the rupee. The rupee appreciated – there was more demand for the rupee compared to the dollar.
Exporters complained. So the RBI stepped in and bought all these dollars from the market, to disallow the rupee from rising. When the RBI bought dollars, it printed rupees to pay for them.
And too many rupees = inflation. This again was solved by selling MSS securities to suck out liquidity. This was limited to about Rs. 60,000 cr. in total, so the impact wasn’t much.

As of now, banks have deposited nearly Rs. 465,000 cr. (4.65 trillion) into cash management bills so far in December 2016. These are varying in tenure but most will mature in about a month or so.

As you can see, the average interest rate paid by the government is about 6.27% per year, and the total interest it will pay for about a month of such bills is Rs. 2372 crores.
Apart from this, there is about Rs. 140,000 cr. sitting in reverse repos with the RBI – which is another place to park excess cash.
This adds to the effective cost of the demonetization program. Depending on how many months the liquidity remains excess, we will see the government issue such bills regularly.
Hope this clarifies about the MSS scheme and what’s really happening with liquidity. Remember that banks have excess cash now, but as withdrawals continue, the liquidity will drain out and the system is likely to normalize.
What this does do:

This is extremely boring stuff. Let me give you the answer to the question you’re thinking about:
Question: If I didn’t know this, would it hurt me in some way?
Very Short Answer: No.
Not That Short: Well, if you’re a budding economist (aren’t we all today?) or need to make an impactful conversation that will increase your position in the pecking order of where you are: Maybe. Otherwise, No.