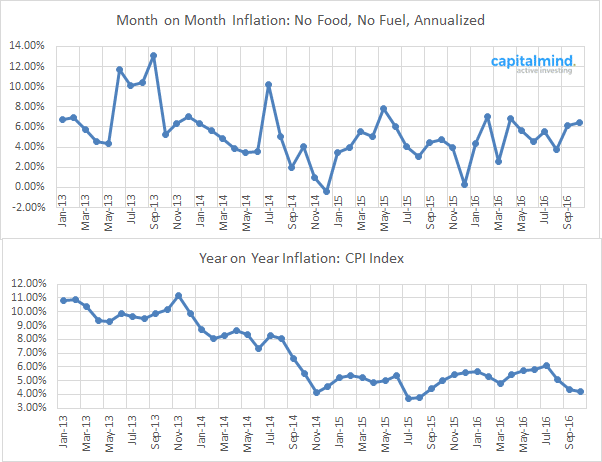 RBI hasn’t cut rates at all. We were wrong.
In the policy statement, the RBI has kept rates the same at 6.25% (Repo). The reverse repo rate is 5.75%. The CRR increase by about 3 lakh crores has been removed after December 10. Both these will help banks – because banks will now earn a higher interest on their excess reserves (CRR earned no interest).

The reason for a no-rate-cut?

Two things: Crude prices are going up, and non-food-non-fuel inflation is not going down.

Another disconcerting feature of recent developments is the downward inflexibility in inflation excluding food and fuel which could set a resistance level for future downward movements in the headline. Moreover, volatility in crude prices and the surge in financial market turbulence could put the inflation target for Q4 of 2016-17 at some risk.

And its true. Core inflation is now at the highest in a few years (the purple line): And month on month inflation (in the Core basket) too has been rising:

Which indicates their fear of inflation. Plus crude prices went up 20% and the USDINR is at 68 or so, which is likely to increase fuel prices in the near term.

Well, about 12 lakh crore rupees worth notes are back. That’s not too far from the total number of notes out there (about 15 lakh crore worth). We said earlier that all the notes will come back. And looks like they will.
Secondly the post policy discussion said the RBI would see no liability change even if some notes don’t come back. Therefore, no special dividend from the RBI to the government; the liability stays on the RBI books forever.

This is positive in the near term for banks. They were keeping Rs. 300,000 cr. as CRR at no interest with the RBI. Now that the excess CRR is gone, they get to earn interest on the money – which will be around 6.2%.
Bond yields have turned back. The commentary by the RBI is hawkish. They think the GDP impact of the demonetization is “transient” – meaning, it won’t last long. They also think the volatility caused by world factors (US rates etc) which can spillover into our economy. But in general, they find it prudent to wait until the impact of demonetization is clearer before they hit the cut button. And that can take a while to realize, so bond prices fell, and bond yields went up.
The market didn’t like it. From +1% the market fell to -1% before it recovered a little. People expected a rate cut in the market. (Even we did)
Overall, this is a negative development for the economy, in our opinion. Banks will benefit but will not be forced to cut rates to lend. The real economy won’t see lower rates, and therefore a recovery will be slow. India is going to see a lot more in terms of negative data as the cash crunch works its way into the visible part of the economy, and it won’t be pretty.