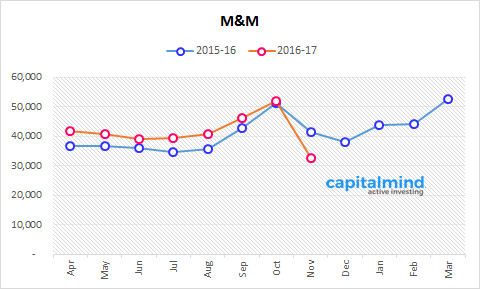 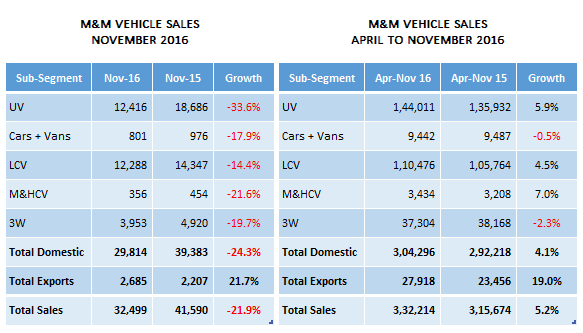 While we expected an improved auto industry performance on the back of the festive season and other positive parameters such as rural demand and interest rates softening, the sudden announcement of demonetization has brought in an immediate disruption and uncertainty. While it is good and welcome step in the mid to long term, this has dampened overall sentiments leading to postponed buying thereby resulting in a major drop in volumes during November. This is significant as the automotive industry had just started experiencing stability post a long and tough period of uncertainty.

Elevating the M&M Lieutenant Dr. Pawan Goenka – the man behind M&Ms transformation gets a higher position at Managing Director. He held the post of Executive Director and Group President (Auto and Farm Sector).
Dr. Pawan Goenka joined M&M back in 1993 in its R&D department as a General Manager and has been instrumental in growing the R&D capability of Mahindra and also the launch of the Scorpio SUV.
M&M reported a profit of Rs. 915 crore for Q2 as the company sold 1.14 lakh vehicles during the quarter. (Read here about its new launches, facelifts and financials).
M&M becomes the first Indian OEM to be part of this prestigious global alliance announcing that its Mahindra XUV500 and Scorpio will now be available with Google’s Android Auto technology. With the help of Android Auto, users can connect their smartphone and tablets to the vehicle’s infotainment system. This will enhance the safety due to lesser distractions and ease driving by allowing the drivers to access maps through voice commands or via switches and buttons mounted on the steering wheel.
M&M inaugurated its new spare parts warehouse in Mahindra World City (MWC), Jaipur. The warehouse will cater to the requirement of Mahindra customers in north and north western region of the country for both automotive and tractor spare parts at an investment of Rs. 150 crore. This is Mahindra’s 4th spare parts warehousing facility, with the others being in Kanhe for Automotive Parts, Bhiwandi for Tractor parts & Hyderabad for Commercial Vehicle Parts, which send out supplies directly to dealerships and in the open market.
With a target to enhance customer interest, M&M launched 2 new digital platforms – each aimed at buying experience and enhancing the ownership experience.
For buying experience, www.mahindrasyouv.com is where a prospective customer can explore the company’s vehicles, accessorise them and ultimately make a booking.
The second platform, www.withyouhamesha.com caters to the post-sales area. Using this platform, Mahindra’s existing customers can store all their car details online and book services.

M&Ms used car arm – Mahindra First Choice is planning to raise up to $50 million via stake sale. This stake sale would help the company’s expansion and strengthening technology for the future. The funding will also be directed it’s recently launched portal carworkz – that allows customers to book, review and rate the independent garages.
Mahindra First Choice currently has 215 networks and plans to increase this to 500 in the next 1 year and to 1000 in the next two years. This comes as it targets around Rs 1,000 crore over the next three years from the current Rs 150 crore.

With a refocus on its two wheeler business, M&M has decided to target premium niche segment currently dominated by Royal Enfield among other brands. M&M has acquired Classic Legends and plans to enter previously untapped segments using iconic brands like BSA and JAWA.
Mahindra will continue production of its existing brands – Centuro, Gusto and Mojo at its Pithampur plant in Madhya Pradesh. However, the launch of new products that would happen in around two years would be under the respective brands and not Mahindra’s – strategy similar to Ssanyong acquisition.
The company has also plans to turnaround the Peugeot Scooters it acquired in 2014 (M&M owns 51% stake in Peugeot Motorcycle while the rest is held by PSA Group of France). The company clocked in volumes of over 60,000 units in 2015. Its way forward plan has been prepared to expand to new geographies with new products in its portfolio targeting 10% growth in the next 3 years.
Love it or hate it, do leave us with your reviews in the comment section below!