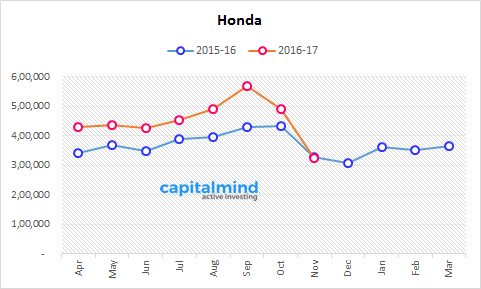 As per the company, despite the total industry sales falling by 5%, Honda steered clear of any drop in sales and instead gained 1% market share to 23% in November 2016.
YS Guleria, Senior Vice President – Sales and Marketing, Honda Motorcycle and Scooter India, said:

Compared to festival buying in November last year, this year the industry was prepared for an organic correction in November. However, demonetization announcement took everyone with surprise. Two-wheeler sales dropped by 50% in the first 3-4 days of announcement. But recovery started by week 2 and by the end of month, Honda’s all India sales returned to almost 80 percent of normal level with South, West and East leading the recovery.

After witnessing the exemplary performance and success of Repsol Honda Team at the at the 2016 MotoGP season, we wanted to offer customers and racing enthusiasts, a unique experience of owning their very own Repsol Racing Replica motorcycle. We have adopted Team Repsol Honda paint & graphic scheme directly inspired by the legendary RC213V including the numbers of our star riders, Marc Márquez and Dani Pedrosa.

A representative of Honda Motorcycle dealership commented on the demonetization:

It may be a good move in the long term, but for now sales have stopped. Close to 95% of our customers pay by cash, and only a handful use other means such as credit cards. With only Rs 2,400 in their hand, it is not surprising that they aren’t buying two-wheelers.