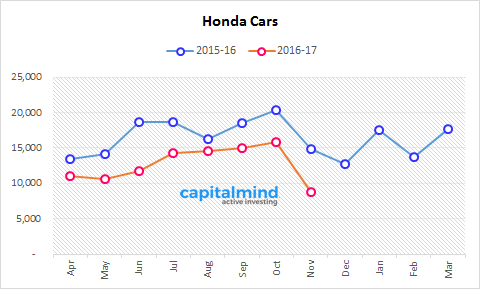 The November month saw major disruptions in the market due to the on-going effects of demonetization and cash crunch. The consumer sentiment was low and footfalls and enquirers at the dealerships also slowed down during the month. We have taken several constructive steps to neutralize the impact of demonetization, which includes squeezing the wholesale to avoid the stock piling up at the dealerships. We believe that the situation will normalize in the near future and our sales performance will improve accordingly

Launching the New Brio, Honda Cars India (HCIL) is also looking to rake in revenue from its components export of around Rs 1,675 crore. HCIL supplies different engine parts, forgings and transmissions along with others to Honda, produced at its Tapukara plant in Rajasthan.
Here is the new Honda BRV New. Named the WR-V – a crossover-hatchback based on the Jazz slated for March, 2017.
Image Honda BRV New
Honda will unveil the facelift of its Honda City – 3 years after the launch of the fourth generation model. As per media reports, the facelift is rumoured to be launched in January, 2017.
Honda Cars India has decided to tie up with HDFC, Axis and ICICI Bank to provide up to 100% loan facility to its prospective customers at a time when demonetization is hitting its business. The company has negotiated 100% on road and ex-showroom funding deals with HDFC, Axis and ICICI Bank.
Love it or hate it, do leave us with your reviews in the comment section below!