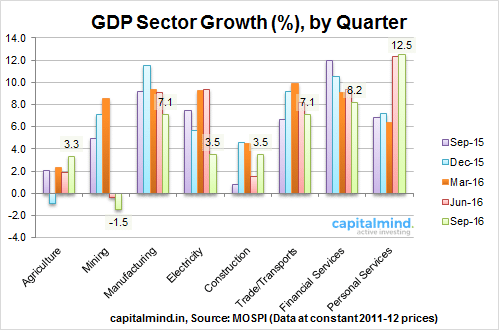 The GDP data released recently by MOSPI shows growth at 7.3% in real terms (post inflation). This probably means little now that there is a big hit to the current quarter (demonetization) but let’s see what the graphs show. First, the sector data:

Agriculture’s had a good quarter – and it’s been a good monsoon. And  Government services had a great run with 12% real growth. But growth in every other sector seems to be slowing. Manufacturing generated just 7.1% growth, the lowest in the last few quarters. Growth in Financial services was the lowest in a year,and so was Mining, which contracted.
But looking at it from a Component perspective, the biggest growth was in Government consumption – which was up over 15%.
Private consumption (which is 60% of the economy) has stuck on at around 7.6% and Investments and inventory have been lower than a year ago. Imports were lower but exports were steady, making trade an actual surplus. 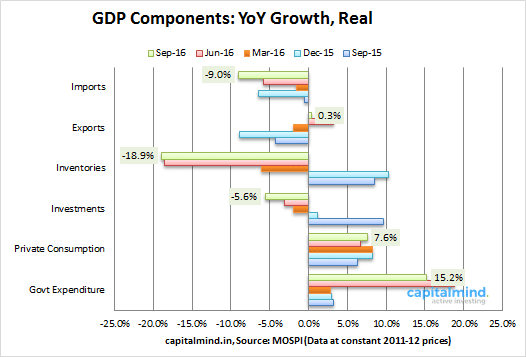 The real growth in GDP is simply the Nominal Growth minus inflation. This time, real growth was 7.3% but nominal growth went up! 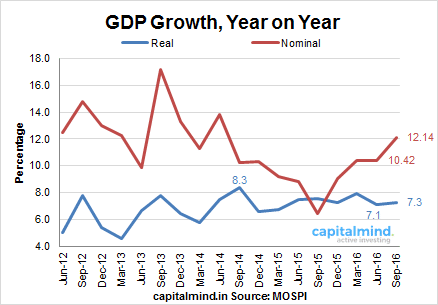 This is the highest nominal growth in two years, largely because inflation is back now in the system. And that’s defined by the GDP deflator – which is now +4.7%. 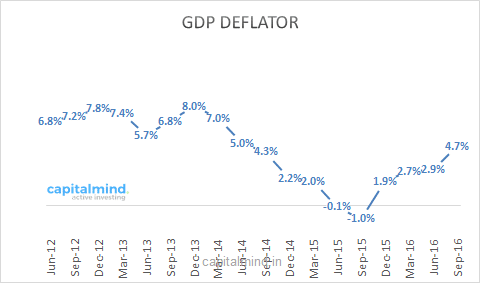 GDP in Q3 (Released sometime in Feb 2016) will be interesting. We believe that private consumption should show a large decline, and government spending may continue to be strong. Investments would have fallen somewhat, and we expect the import/export situation to be no different.
It’s quite likely that the GDP data doesn’t show a contraction overall – because we have data collection that might not reflect it. And, in reality, with so much cash coming into the system there is visible GDP additions. But the lower spending, lower tax collections and overall loss of activity due to lack of cash will probably overshadow the additional GDP visibility for Q3.