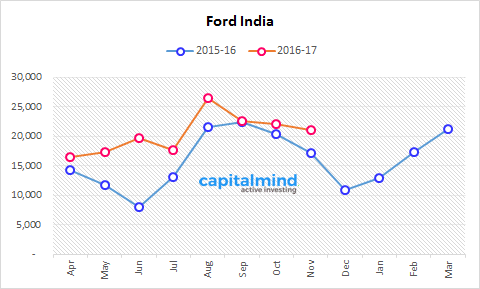 While the macro-economic indicators continue to be positive, the auto industry does face short term headwinds given the recent demonetization drive.

Our strategy of product led innovation, a differentiated customer experience, and breaking the myth on our cost of ownership has ensured that Ford continues to grow faster than the industry since the start of 2016.

Ford invested Rs. 1,300 crore for a green and modern new Global Technology and Business Center in Chennai. The company will hire over 3,000 skilled workers in the next five years to fully staff the new center.
The center will help Ford to continue to innovate in manufacturing around the world, standardizing processes and making use of the latest technologies to enhance efficiency. Ford’s India operations have contributed very little to its parent company as none of its super launch models were able to meet the growing demands of the SUV hunger Indian audience. None of its models have left a lasting impression in the Indian minds. Domination of SUV in the market is what Ford expects by 2018 when they would account for close to 40% of all vehicles sold.

Ford unveiled the new version of its EcoSport at the Los Angeles Auto Show and taking a leaf out of Narendra Modi’s mission for “Make in India”, the company has decided to export newer version to the US from its manufacturing base in Chennai.
Michael O’Brien, Ford Marketing Manager for SUVs, said:

We build EcoSport in six locations around the globe. We sell it in 100 markets, and so, just like we make Explorers and export from here into other global markets, we are going to export EcoSport from Asia Pacific, and we are going to sell it here in the US.

Ford is also going ahead with plans to shift its production of small cars from Michigan to Mexico. This comes at a time when President-elect Donald Trump has criticized Ford for the decision to shift production of Focus small cars to Mexico in 2018.
Chief Executive Officer Mark Fields said:

We’re going forward with our plan to move production of the Ford Focus to Mexico, and importantly that’s to make room for two very important products we’ll be putting back into Michigan plants. There will be no job impact whatsoever with this move.