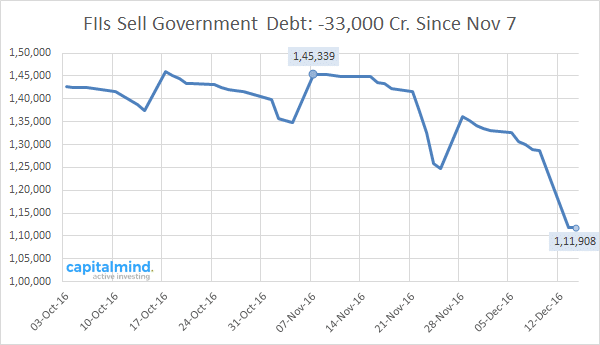 Foreign Investors loved Indian government debt for a long time. But recently, that love has gone away. After Trump and Demonetization they have sold over Rs. 33,000 crores – or about 22% of what they held.

FIIs have been close to their limits (150,000 crores) for a very long time now (nearly two years). But for the last month or so they’ve moved out substantially.
One of the reasons: The US 10 Year Yield is rising. It’s now at 2.58% after the Fed chose to raise rates by 0.25% yesterday. This is the highest yield in two years, and it’s been rising from 1.39% in July this year. Indian bonds, meanwhile have seen falling yields – from nearly 7% in July to about 6.2% earlier this month (6.6% now). The spread between the two is typically the currency risk – and it has been very very narrow. As the currency risk increases, the spread widens, and Indian government bonds aren’t as attractive.
Secondly, LIBOR is up substantially, to 1.65% for the one year USD Libor. This is an international benchmark that is usually the “floating rate” for loans (businesses borrow at LIBOR+3% for instance) which means rates have been rising for everyone. (Our premium post: The Strange case of the rising LIBOR recorded this as early as 2009)
Impact: All this does is to reduce the demand for Indian government bonds by foreigners.They are not large players in the market but to sell this quantity has had an impact – yields in Indian 10 year bonds are up to 6.5% or more. Longer term bond funds and many dynamic funds sit on the longer end of the yield curve, so they have suffered more.
(A little marketing – in another premium post, we suggested a move out a week back, after yields gave way. )
Foreign investors are likely to sell more, but important banks aren’t likely to be big buyers anymore, since most of the old notes have been deposited. With US yields rising and the RBI not showing signs of wanting to cut rates, longer term bonds aren’t as exciting anymore.