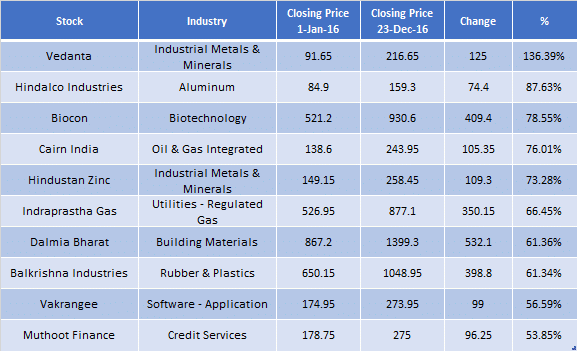 The diversified natural resource company led by British based Anil Agarwal had a year full of achievements and controversies. On the achievements front, the company successfully bid for the Baghmara Gold block in the State of Chhattisgarh, its subsidiary Sterlite Ports won the contract for redevelopment of existing berths at the Port of Mormugao, Goa and the power segment brought online the Talwandi Sabo Power Plant’s third unit of 660 MW in Punjab along with the reissuance of the import permit of iron ore – this was cancelled and then re-issued within a couple of months.
Sesa Mining Corporation suspended the work at Bicholim mines due to union agitation / activism which the company said does not in any way impact the business deliverables and the grave was re-dug with wild speculation of Vendata-Cairn merger which has an income tax claim of over 10,000 crore.

While the company witnessed rising inventory of Aluminium last year due to free flow supply from China, 2016 turned around for the Aditya Birla Group as it witnessed better demand from the auto sector which looked for growth from both its conventional and new age products. The auto sector demand was followed by property market and infrastructure investment. Hindalco expects this to continue into 2017 as Aluminium prices appear to have bottomed out and the hardening of energy prices will support the cost curve.
Coal prices – a major cost factor for the company’s production capacities witnessed a jump as heavy rains and floods hampered material availability along with quality.
Better scale economy and control over key input costs is what the company hopes for in the coming quarters. 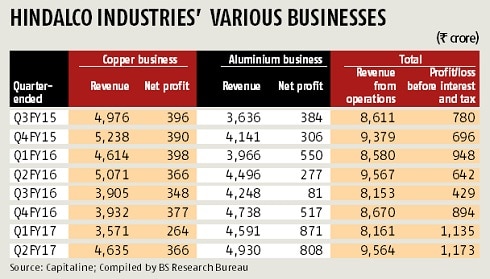 This is how Bloomberg described Kiran Mazumdar Shaw and the performance of Biocon – How One Woman Silenced Her Twitter Trolls With a 78% Stock Rally. Biocon witnessed 2 big green candles in the stock price of the company jumping from Rs. 720/- to Rs. 805/- on the 22-Jul and from Rs. 813/- to 882/- on 9-Nov.
Cementing its foothold in the Insulin market, April was the first month when the stock witnessed huge volumes as Biocon received approval for its biosimilar Insulin Glargine. Biocon topped this up with results from its partnership with Mylan on Trastuzumab Biosimilar (this was after Glargine agreement) and Quark for Phase II/III Study of QPI-1007 in Rare Eye Disease.
With Syngene spun off into a separate listed entity, Biocon is now close to achieving a revenue target of close to Rs. 4,000 crore with profit margins in the range of 17-20%.

The Oil & Gas Exploration Company in India ranked 4th on our list with returns of over 75%.
Playing a pivotal role in developing India’s Oil and Gas resources for 20 years Cairn plans to invest Rs. 30,000 crore in the next 3 years which will mean that its oil production goes up by an additional 100,000 barrels per day (in Q2 Cairn products 2,06,230 barrels per day with most coming from the Rajasthan block which it discovered in 2004).
Come March, 2016 – Cairn is on track to merge with Vedanta to create India’s largest diversified natural resources firm taking on BHP Billiton and Vale SA.
Next year the government is due to renew Cairn’s contract of the Rajasthan block which it has been negotiating for about three years. The current agreement expires in 2020 and the company is looking for a 10 year extension with hopes that the terms do no change though the Oil Ministry is focussed on a higher share of profits.  (Out of the $50 barrels per day of price, the government gets USD 43 (in taxes, royalty, cess and profit petroleum) and the company gets $7). This comes at a time when the government looks to reduce imports it to 67% by 2022 from the current 82%.
EPS of oil producing companies increase as oil prices rise. With OPEC cutting down production systematically in 2017 to keep oil prices artificially higher, this means price realisation of ONGC, OIL and Cairn India will improve.

The company with the largest market cap of the Top 10, Hindustan Zinc traded from Rs. 149/- to Rs. 259/- by the end of this year. Metal and Energy best performers in 2016, Pharma and IT worst.
This is the third stock part of the Vedanta Group in the top 10 large cap out performers. Hindustan Zinc is the world’s second largest zinc producer with business comprising of captive power generation as well. The company’s performance in Q1 and Q2 has been dismal with standalone revenues falling 30% in Q1 and 11% during Q2.

With operations in Delhi, Noida, Greater Noida and Ghaziabad, IGL has a total of 418 CNG stations. Along with this, its gas pipeline network supports close to 6.75 lacs residential consumers.
During the year, IGL received a LOI from Petroleum and Natural Gas Regulatory Board (PNGRB) for grant of authorization for development of City Gas Distribution (CGD) network in the Geographical Area of Rewari district. IGL hopes to start the 1st CNG station in Rewari by the end of this March, 2017. Yamuna Nagar and North Goa are 2 other regions it had submitted bids for.
IGL Growth strategy for 2017-18 includes expansion to newer cities, improved infrastructure of its current operations in NCR to meet the outgrowing demand from both passenger vehicles and public vehicles.
Most brokerage firms term IGL as a green play on rising pollution concerns. Some of key factors to be watched out for includes increased cars/taxis conversion, unavailability of CNG kits, slowdown in industrial sales, rollout of new CNG stations, and addition to bus fleet in Delhi, regulatory push, and geographical expansions.

The Delhi based conglomerate with businesses in cement, sugar, travel agency, magnesite, and refractory consolidated its Eastern India operations whereby OCL would emerge as one of the largest Portland cement producer in India. This also means much-needed scale and improved operational efficiency.
This merger would move the company into 4th largest cement maker with an installed capacity of 25 million tonnes per annum and the revenue for this merged entity would be in excess of Rs. 10,000 crore.
The stock has moved from Rs. 867/- during the start of the year to Rs. 1,400/- returning in excess of 60%. This even though the stock fell almost 700 points since demonetization drive. Manufacturer of Off-Highway specialty tyres along with products for Agricultural, Industrial, Material Handling, Construction, Earth moving (OTR), Forestry, Lawn & Garden Equipment and All Terrain Vehicles, Balkrishna Industries occupies the third last place with a  61.34% return in shareholder value as the stock crossed the 1,000 mark at Rs. 1,048/-.
BKT is also known for being the leading exporter of “Off-Highway Tire” as the company today comprises of over 2,300 SKUs with sales to over 130 countries. BKT has 4 plants – one each in Aurangabad, Bhiwadi, Chopanki and Bhuj.
During the year, the company marked its entry into the 2/3 Wheeler Tires business which will further boost the revenue of its dealer network. Its FY17 Volume Guidance remains at 160,000MT – 170,000 MT (a little over 50% of the installed capacity) against 148,244 MT achieved in FY16.
BKT also has set a goal to design, develop and produce about 100-120 SKU’s every year mostly coming in from the R&D team of close to 90 personnel.
During Q2, the company doubled its Net Profit to Rs. 243 crore from Rs. 106 crore year-on-year as revenues jumped from Rs. 822 crore to Rs. 947 crore.

The technology driven company providing real-time banking services, insurance services, e-governance services, e-commerce services & ATM services has closed to doubled the returns of its shareholders’ investments. The stock traded at 274/- against 174/- on 1-Jan-16 clearly declaring that tech is not in hibernation mode yet.
Vakrangee kick started the year and maintained the same momentum of aggressive tie ups with various partners across different industries. Its Vakrangee Kendras started promoting and accepting automobile booking for M&Ms ranges. Then it moved ahead targeting Insurance companies to sell their products across its Vakrangee Kendras by first tying up with Tata AIG General Insurance, Bajaj Allianz, HDFC Standard Life Insurance, Reliance General Insurance, Cigna TTK Health Insurance, Religare Health Insurance and finally with HDFC Ergo General Insurance. The tie ups were not limited to these as the contract with IOC widened their reach across Rajasthan and Uttar Pradesh. To improve its last mile connectively, the company also tied up with Delhivery and Aramex.
Post demonetization, the company has entered into the business of Semi-Closed System Payment Instrument – payment instruments that are redeemable at a group of clearly identified merchant locations. Its aggressive expansion plans for next year stands at 35,000 Rural Kendra and 15,000 Urban Kendras for 2017-18.

Still surviving the demonetization bug, the stock is the last of the top 10 performers having lost over a third of its value since the 9-Nov from Rs. 366.2/- to the now levels of Rs. 270s/-.
Over the past 12 months, rarely has there been a month when Muthoot Finance has not witnessed any action. The company closed 2015 with Retail Loan AUM of Rs. Rs.24,990 crore at it stretched itself both vertically and horizontally with a network of 4,259 branches across 27 States.
Muthoot made its foray into the MFI business in the month of May by acquiring  a significant stake in Belstar Investment and Finance – a micro finance company based in Chennai. BIFPL was registered with the RBI in March 2001 as a Non- Banking Finance Company and was reclassified as “NBFC- MFI” by RBI from 11th December 2013.
In June, Muthoot completed the acquisition of the Insurance Broker business to make it a wholly owned subsidiary of the firm. This marks its entry into the Life Insurance and Non-Life Insurance business. The insurance business has insured more than 4,59,000 lives (from 2,92,000 in 2015) with a premium collection of Rs. 49 Crore (from Rs. 35 crore in 2015) under Traditional, Term and Health products. Sometime in August both ICRA and CRISIL upgraded the Long term Debt Rating from AA-/ Stable to AA/ Stable.
You can find some interesting reads on Muthoot Finance Bonds here:
Introducing Bond Baba – Beat FD returns with Bonds
Bond Baba: Fight Those Demons, Harvest Those Losses [Happy Diwali!]
Love it or hate it, do leave us with your reviews in the comment section below!