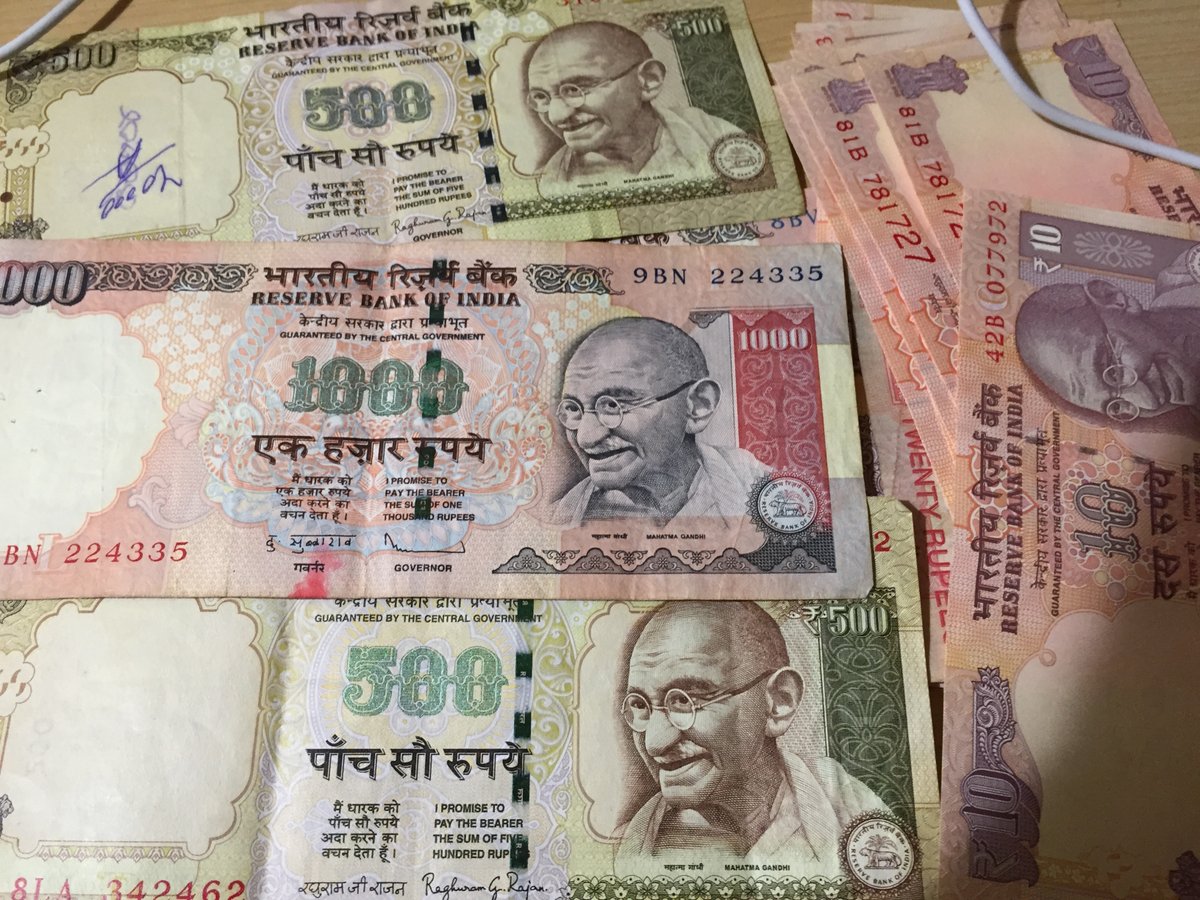 All that anyone seems to be talking about is the demonetization drive. Essentially, this involves invalidating the Rs. 500 and Rs. 1000 notes, and asking people to exchange this with different currency – a new Rs. 2,000 note, or use the old 100s and 50s and so on.
This is intentioned to hurt people that “hoarded” the big notes which presumably is a function of their not having paid tax on it and thus is black money. That view itself makes it immensely popular. But these notes are 86% of the notes printed, and there is VERY little chance that all of it is black – most of it is valid, good money, in my opinion (though data is very scarce here).

The problem with Notes

Can the notes issue contract the Indian GDP? Let me first try and explain.
The simple problem now is: people do not have enough cash to transact. If you want to buy something worth Rs. 300, and you’re not the tiny 1% that buys things using credit/debit cards, then you are in a mess. Do you:

So you shy away. This doesn’t apply to most of you reading this. You’ll buy on Amazon or Flipkart on your cards, and you’ll use Uber or Ola for your rides. You’ll pay for fuel via cards, your rent via NEFT, your credit card bills online and your EMIs through ECS. This is awesome – and I am a huge fan because I’ve had to use very little real money in the last few days. But this is not the whole country of India.
Think of auto drivers, labourers, vegetable vendors, small kirana retail shops and so on. They earn in cash and spend in cash. They aren’t even in the taxable bracket for the most part, and therefore don’t have “black” money – they just have some savings, and those savings sit with them in cash.
Given that the tax-free income per year is Rs. 250,000 you can assume that many of them will have Rs. 50,000 or more saved as cash. They may have a bank account, but most will find it useless; the basic bank accounts only give you an ATM card for you to draw money out. They will hardly visit outlets where cards are accepted, and even if they do, they find it less intimidating to pay in cash. (If things go wrong with a card, it’s almost a full day gone trying to figure out what happened)
This is the India we don’t talk about at parties. But this is the India that’s struggling today, and smiling while they’re doing it because hey, this black money is coming out and the country will get better. They are okay with it for now, because India is running on fumes. We have the adrenalin, the drive, and the feeling of a greater tomorrow. But like every parent that once held an incredibly amazing new-born baby knows, a few weeks later, the adrenalin is gone, you’re dead tired and cranky.
But yes, you have this problem right now that people aren’t transacting. They’re holding off buying new clothes. For that can wait. They’re saying, yes we need new taps and bedsheets but wait till the cash situation is better. They have money, which is now in their bank account because they had to deposit it. But they have no money because the medium that they use for transactions – cash – is crippled. Even if it’s temporary, they will choose to wait.

And that causes a ripple effect on everything in the economy (well, most things) which runs so much on cash. People buy toothpaste and chips and juices and all that, but now they’ll buy just the essentials – toothpaste. Sales get slower. That’s okay, you think, the sales come back after a while. But the problem lies within.
The FMCG companies that deliver to shops work mostly on restocking. You bought X quantities of chips, it usually goes away in 2 weeks, and you’ll need more. So every 2 weeks, we’ll send you chips. Except now, those 2 weeks are becoming six weeks. “Fast Moving” consumer goods become not-quite-so-fast. Stuff stocks up at warehouses, and factories then cut down production.
This cycle is shorter for perishables. And much much longer for durables. Service businesses like restaurants face it too; less customers who usually pay cash, less purchases from their vendors and so on.
A lower spending cycle results in:

Already some Microfinance institutions have said that the situation looks bad if the woes continue for longer. Ujjivan’s CEO has said that most repayments are in 500/1000 notes in cash. Most finance companies in the home finance segment are hurting in the “Loan against Property” area.
Defaults are another issue that will crimp business at financial institutions – which means a slowdown in the real economy becomes a slowdown in the financial economy.

Is A Contraction Bad?

Just because there is a lull in economic activity for a few months doesn’t mean it’s the end of the world. Recessions are good because it is a reset and a clean-up, and over time the recovery is strong. It’s better to have a recession than to live in la-la land – where you have a large number of corporate defaulters and banks are refusing to increase lending.
However it does cause short term pain. Our view on demonetization is that it has happened. There is no way to reverse that. And because it has happened, there’s no point commenting if it *should* have happened. Sure, you could do things differently, but so what.
The point is to deal with it. And dealing with it will cause economic hardship, to some of us individually, and to the economy collectively.
We’ll see lower inflation, though at this point, inflation is driven by supply also, and lower supply might be a concern. Trucks aren’t able to carry things over, and if supplies fall short, inflation will spike. Over time, though, we will see a marked drop in prices if there is a contraction.
A contraction or recession are just terms – in reality, we won’t see GDP figures actually go down, since the data collection process won’t show too many chinks in the armour. But the hit to the economy will be visible even if growth slows from 7% to 3%.
There is long term gain in any recession when things are getting cleaned up. There will be some more use of the banking system anyhow, there will be more cards used, and by the building of new businesses because the fat-slob existing businesses die. Look at the wholesale space in toys or consumer goods – it’s dominated by a few people who have cornered the business due to family connections and close-knit community. This business has been hit heavily, and over the next year, it’s quite likely that organized players will break that oligopoly and get us even better prices.

Ways to Mitigate This Risk

As an investor should we be selling everything? No. Stock markets don’t reflect reality. They have been extremely positive through the last few years where earnings made even lower lows. If they can do so well even on lousy news, we can’t assume that the markets will fall hugely just because there is a contraction.
Markets will be very volatile though, because of all the uncertainty around. You can protect your portfolio (our webinar here on how to do it). Or, you can buy more, over time, because hey, your retirement is still far away and such things will come and go. You shouldn’t blindly sell everything – that’s just panic.
And then, remember: this assessment is just one week after the program. A lot more data will come. And you will find that things turn out differently – better or worse. So it’s best to recalibrate based on new information. Keep enough cash to be able to invest, and don’t be in a hurry to deploy it – there will be great opportunities to invest.