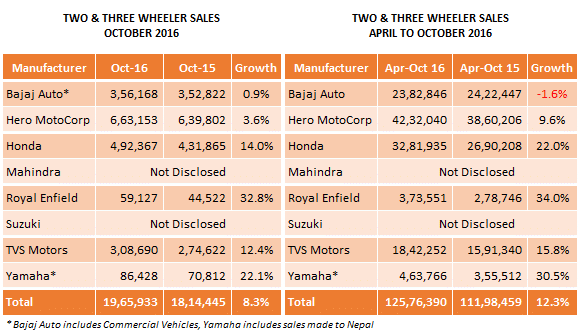 Reporting a flat growth, Bajaj reported a flat or contracting motorcycle business compared to a 9.5% growth in the sales of Commercial Vehicles.
Domestic Sales growth stood at 6% with 2.38 lakh units against 2.25 lakh units while Exports contracted by 8% from 1.27 lakh units to 1.17 lakh units.
Overall Exports were bad for both motorcycles and commercial vehicles with YTD units also down 20% and 33% respectively. 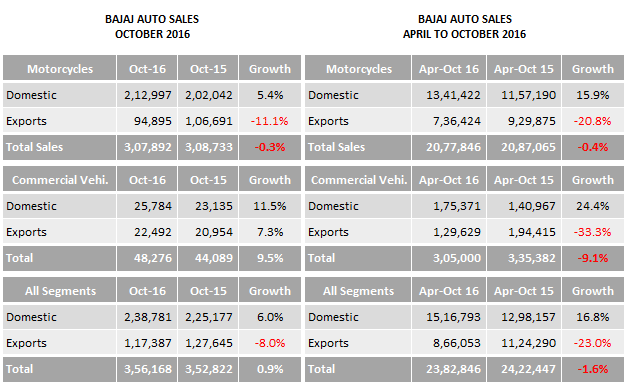 Ramping up the production to reduce the order backlog, Honda continues to target the rural areas which account for over 28% of its overall sales. Festival season clubbed with 7th pay commission, OROP and good monsoons will bring cheers to Honda as it continues to ramp up the production and increase dealer base (Total touch points 4,800 currently with a target of 5,300 by the year end). Its Gujarat plant has started exporting two wheelers to Sri Lanka.
It has recently started shipping the NAVI or New Additional Value for India – the first 100% Honda R&D India model to Nepal where it enjoys a market share of 29%. Due to the huge demand, the company has decided to double the production soon. Within 6 months of launch, NAVI sales have crossed 50,000 units in just six months.
The company is also focusing on Tamil Nadu which is the second largest two-wheeler market in India with Chennai accounting for nearly 50% of two-wheelers sold. Honda enjoys a 36% market share in Chennai.

To meet the overwhelming demand this festive season, we started our preparations almost 6 months back. We have been consistently growing month on month this year. As a trend, automatic scooters are clearly driving the two-wheeler industry growth and with new scooter only 4th plant in Gujarat achieving peak production capacity in September, Honda strategically met festive demand with seamless dispatches over two months. This planning resulted in Honda’s record performance and we acquired more than 10 lac happy customers in the 2 festive months. What is more encouraging is that we added 2.6 lac customers only on Dhanteras day!

October started with a positive sentiment for the two-wheeler industry. We continue to build on the growth momentum during this festive season. Additionally, good monsoon has also added growth to the sales this time.