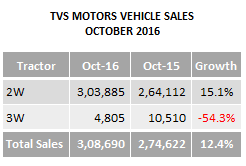 Its flagship model – Victor clocked in sales of 1 lakh units within 9 months of its launch in India with close to 8% market share in the overall motorcycle segment in India. Victor stands to be a major growth driver for the company as it looks to attain 10-12% market share.
Cementing its partnership with BMW, TVS Motor is planning to launch the first vehicle from the TVS-BMW tie-up in Q4 this year. Both the partners plan to launch two products, one under the brand of TVS and the other under the brand of BMW both manufactured at the Hosur facility.
Like it or hate it, do leave us with your reviews in the comment section below.