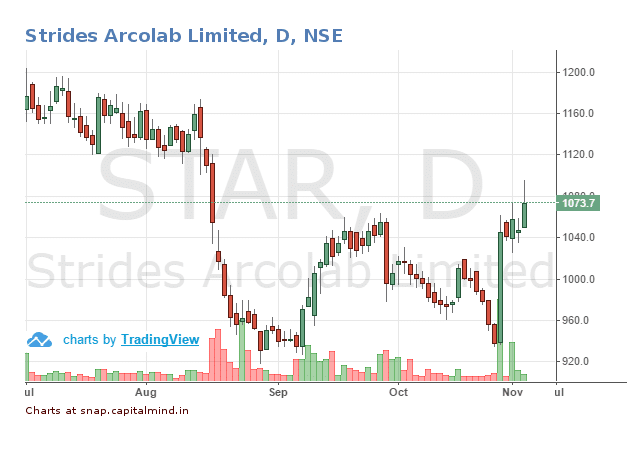 In the latest filing with the exchange, Strides Shasun has settled with Mylan for about $70 million for Regulatory and General Claims on the $1.75 billion Agila transaction. Strides will get back $30 million since it had allocated $100 million in an escrow for the purpose.
We had covered this in a Premium article in 2013, which is where we started the Capitalmind Premium Portfolios, and Strides itself gave us a 180% return in about a year. The Strides sale of Agila was massive, since the company paid out over Rs. 600 as dividend alone (the share price then was 891). And it now quotes over Rs. 1,000.
Two escrows of US $100 million each were provided by Strides to Mylan i.e. US $100m in respect of potential claims for regulatory concerns termed as Regulatory Escrow and another US $100 million in respect of potential claims that may be brought in relation to the warranties and indemnities, including in relation to tax termed as General Claims Escrow.
Regulatory Escrow was required since Agila had been involved in FDA scrutiny, so any adverse issues with Agila would have required a lot of rework in the Agila operation. This was pegged at $100 million in escrow to start with, but would be expanded at a later stage depending on how things went. Then Mylan went on to fire nearly everyone at the Agila operation, and worked to settle the FDA issues. This has apparently reached a cost settlement, finally.
Today, Strides confirmed that both have agreed to settle the Regulatory Claims from the Regulatory Escrow account. Mylan will take US $70 million from the escrow, while Strides will receive approximately US $30 million back.

However, the story does not end here. While this transaction settles the Warranty and Indemnity claims, the General Claims Escrow of the remaining US $100 million will continue to be valid for another 14 months till the end of December, 2017 so that any issues related to tax and third party claims can be addressed from this kitty.
This is however less onerous. Tax indemnity results from any claims that haven’t yet been anticipated since both India and the US have tax-extreme situations. For that and other third-party claims, only $8 million has been paid so far, but there’s time till 2017 December for further claims.
There is also a $200 million corporate guarantee given by the Singapore Subsidiary to Mylan for any claims against the Singaporean entity. This will continue till 2020, but has not seen a payout to Mylan yet. (Unlike an escrow, a guarantee will only see a payment if there is a claim)
The stock is already up over 3% at Rs. 1082/- in the early morning trades.

Strides posted a very decent set of numbers in Q2, with a 33% increase in revenues, a 38% EBITDA gain and a near 100% jump in profit. But note that part of the profits came from the sale of an internal business, and interest costs have doubled after some recent acquisitions. This $30 million – or around Rs. 200 cr. will help in reducing debt (currently at 2200 cr.) if the company so chooses. The December quarter result will see some large extraordinary items on account of the settlement, but will not impact operations other than perhaps the reduced interest cost.
Disclosure: Strides Shasun is part of a Capitalmind Premium portfolio, and it is safe to assume that the author and/or others at Capitalmind own the stock and therefore could be biased. There is no other relationship, financial or otherwise, between Capitalmind and the companies mentioned above.