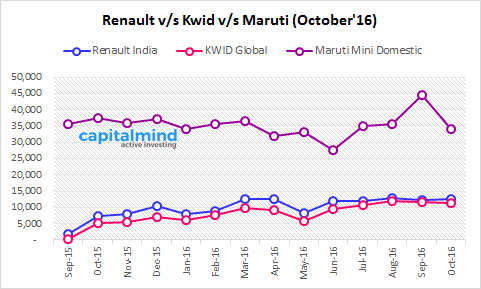 Groupe Renault revenues came to €10,546 million for the quarter. The 13.0% increase was mainly due to the European market’s continuing strong performance and the success of the group’s range. The company’s market share grew across all regions.
In India, Renault registrations multiplied sevenfold thanks to the success of Kwid. 82,771 Kwids have been registered since the start of the year, including 34,350 in the third quarter alone.
Groupe Renault confirmed its guidance for full-year 2016 with India in the range of +7% to +9%.
During the course of the quarter, Renault closed 2 dealerships one each at Ahmedabad and Purnea in Bihar while adding 37 additional dealerships – Tamil Nadu witnessed the highest at 9, followed by 5 in Maharashtra and 4 in Uttar Pradesh.
Like it or hate it, do leave us with your reviews in the comment section below.