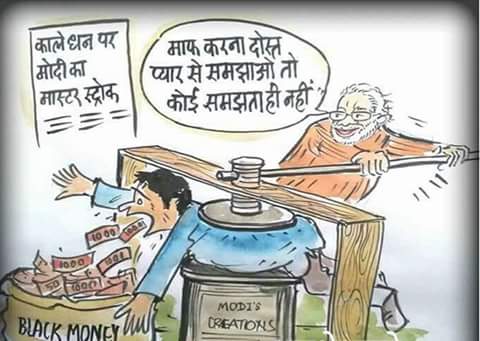 #macronomics: Deposits of Old Notes in Banks Not to Enjoy Tax Immunity: FM

Finance Minister Arun Jaitley today said deposits of now-defunct old Rs 500 and Rs 1,000 currency notes in bank accounts will not enjoy immunity from tax and the land of law will apply on source of such money. Outlook India

It’s a simple game where seasoned chartered accountants and money market brokers bring together two kinds of people: one, with excess, unexplained cash and the other having a shortage of it. Economic Times

#general: Why Mumbaikars bought gold all night long on a weekday

Cash deposits made within exemption limit may not draw income tax scrutiny. Livemint

In Fooling Some of the People All of the Time, A Long Short, David Einhorn writes “Selling short individual names offers two ways to win — either the market declines or the company-specific analysis proves correct.” A broad market decline will help your short book, but it is impossible to predict. It is more prudent to focus on the latter possibility: profiting from the short sale of single stocks. CFA Institute

#general: We did say we wanted less corruption

For decades, the honest have felt like fools in a nation that runs on graft. The complicity, and active encouragement, of the political leadership gave feet, legs and body to this parallel economy. Livemint

Thousand and five-hundred rupee notes account for 85% of the value of currency – which is roughly Rs 17 lakh crore. If 30% of this is black money, it means about Rs 5 lakh crore would either find its way to bonfire or be caught in the taxman’s net or turn out to be a mix of both. Economic Times

#general: On day of Trump’s victory, eBay lays off staff in Bengaluru

Online marketplace eBay is laying off staff in Bengaluru and taking back work to Silicon Valley. The decision came on Wednesday as Donald Trump got elected as the 45th President of United States on promise of bringing back jobs home. Business Standard

Profits at Emirates Group, the holding company for Dubai’s aviation businesses, fell by 64 per cent in the first half of the financial year 2016-17, as it was affected by the strength of the US dollar and a “challenging operating environment”. The National AE

Off the Lows – Joshua M Brown

#general: Was this the reason for Cyrus Mistry’s ouster?

Sources close to the group speculate that Mr Mistry may have stumbled upon a hot button issue with Rata Tata: the relationship with C Sivasankaran, promoter of Sterling Infotech, with whom Mr Tata seems to have had a very cosy financial relationship for more than a decade. Moneylife

#general: In one stroke, demonetisation has shaken the trust our monetary system is based on

Even the long-term benefits of the move seem to be outweighed by the heavy costs and disruption it would cause, particularly for the lower income groups. Scroll

#general: Donald Trump, cellphones and the age of bubbles

There is a link, a correlation between the rapid rise of the strong leader and the cellphone. Livemint

#general: Trump warned Amazon would have ‘problems’ under his presidency – here’s what could happen

It’s fair to say Donald Trump and Amazon CEO Jeff Bezos aren’t on the best terms.
Trump has often attacked Bezos for using his Washington Post ownership to keep taxes low on Amazon and free of antitrust allegations, famously saying, “if I become president, oh, do they have problems.” Business Insider

Stocks on Wall Street have opened higher as financial markets have put behind the nervousness that had beset them after Donald Trump’s election victory. Investors were surprisingly upbeat also in other world regions. Deutsche Welle

The investigation units of Income Tax department has started search and survey operations across the country on Thursday evening after they found that jewellers and hawala operators were discounting banned Rs 500 and Rs 1,000 notes+ at 40%. Times of India

The demonetization of the two largest denominations in circulation is an interesting move by the PM. Black money seems to be one and the second seems to be the counterfeit that comes across our borders. The counterfeit note is not a small issue. To put it in perspective, there is around Rs.15 lakh crore of bigger denomination notes. One report said that the extent of fake notes caught and destroyed amounts to over a lakh crore rupees! Surely, not a small issue. BabaBlogs

The Modi government’s decision to demonetise Rs 500 and Rs 1,000 notes is bad news indeed for the ongoing agitation in Kashmir that is funded largely through illegal hawala channels. Home ministry officials told Hindustan Times that separatist leaders in the state have communicated their concerns to the agitating cadres. Hindustan Times

The ISI-backed fake Indian currency notes (FICN) printing modules in Peshawar and Karachi have gone back to printing notes of denominations of Rs 100.This was revealed by chatter picked up by intelligence agencies through Tuesday night and Wednesday. Economic Times

The Confederation of All India Traders said small and medium businesses were severely impacted, and appealed that they be authorised to accept at least one higher denomination note from consumers with KYC details. The Wire