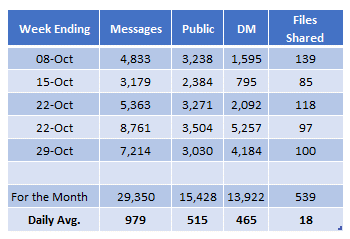 To give you some more clarity on Slack statistics or to prove what exactly you are missing out, here are the stats for Oct-16

An avg. of over 950+ conversations exchanged on a daily basis both the public channels and in groups. We have had 29,350 conversations in October and users shared over 539 files between them – including but not limited to the content below. Still undecided on your premium subscription?

Join here for as little as 1,667/month or check out the features here

#general: This Bull Market Has Room to Run

#general: How can Citizens/Residents of India invest in U.S. Equity Markets

An internal World Bank investigation released on Monday morning has found evidence of serious labour rights abuses on tea plantations it finances in Assam. The report also implicates the Tata Group whose wholly-owned subsidiary Tata Global Beverages owns just under 50 per cent of the company that owns the plantations. Huffington Post

Barack Obama will go down in history as having sold more Treasuries and at lower interest rates than any U.S. president. He’s also leaving a debt burden that threatens to hamstring his successor. Bloomberg

#general: Ease of doing business ranking may not be reflecting ground reality

States with higher ranking are found to lag others in terms of converting project proposals into actual investments. Business Standard

Once the richest country in South America, it now has the world’s highest inflation rate and is plagued by hunger and violent crime. How did this happen? The New Yorker

#general: Over 135 pay channels are not complying with 12-minute ad-cap rule: Trai