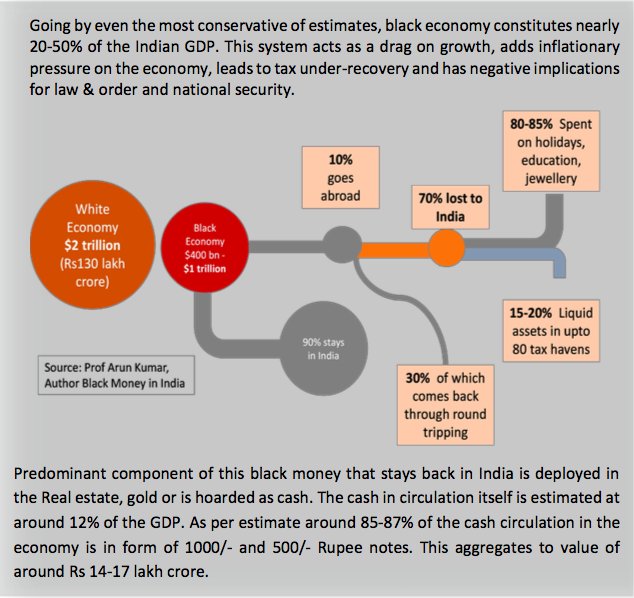 If done so, then the demonetization move will be viewed as being done with other motives, rather than fighting black money, says former RBI governor Subbarao. Livemint

India’s largest public sector bank has dropped more than Rs 7,000 crore, more than 80 per cent of the amount owed to it by its top 100 defaulters, into the Advance Under Collection Account (AUCA) bin for toxic loans. DNA India

Messaging company, now called Snap, could be one of the highest-profile stock debuts in years. WSJ

State Bank of India and its associates received deposits of more than Rs 92,000 crore across their 24,000 branches by Tuesday, following the government scrapping Rs 500 and Rs 1,000 notes on November 8. Arundhati Bhattacharya, the chairman of India’s biggest bank, told ET that normalcy is being slowly restored as ATMs are calibrated to dispense new notes, adding that interest rates will fall on loans and deposits. Economic Times

#macronomics: GOP and Trump put deficit on back burner

Giant infrastructure plan, major tax cut on the agenda — and so is a huge increase in the debt. Politico

Some Indian gold traders are placing bulk, short-term import orders on fears that Prime Minister Narendra Modi might soon add curbs on overseas purchases of the metal to his withdrawal of high-denomination banknotes in his fight against ‘black money’, traders and jewellers said. Yahoo Finance

Microfinance-turned-bank Bandhan Bank on Tuesday said it has suspended its micro-credit disbursement after the government demonetised Rs 500 and Rs 1,000 notes on November 8. Bloomberg Quint

#general: No bonanza for the government from cash destruction

Cancellation of some currency notes would increase the net worth of RBI but not its cash income that comes from interest payments and out of which seigniorage is paid. Livemint

Banks have begun to cut both their deposit and lending rates after a surge in liquidity as customers continue to deposit old Rs 500 and Rs 1,000 notes into bank accounts. While Axis Bank has cut its lending rate, State Bank of India and Kotak Mahindra Bank have lowered their deposit rates. Times of India

Information gathered from a person’s social media account will be matched with his or her declared income. Business Standard

The real estate industry is already feeling the pinch of Modi’s demonetisation move against black money. City-based developers, who did some good business during the festive season, have seen 60 per cent cancellations on the Deepawali bookings. Bangalore Mirror

#general: In Pictures: A Week of Long Lines and ‘Demon’-etisation Distress

After the announcement of immediate demonetisation of Rs. 500 and Rs. 1,000 currency notes by PM Narendra Modi, earlier this week Paytm announced that it will take a flat 1 percent fee to allow users to transact money from their wallets to their bank accounts. This was followed by an announcement of free bank account money transfer service from rival mobile wallet MobiKwik. Now, in a move to remain competitive, Paytm has announced that it will also offer the service to its KYC (Know Your Customer) compliant customers till December 31. NDTV Gadgets

Asked about her own future, Yellen said it was “fully my intention” to remain as Fed chair until her four-year term ends on February 3, 2018. Indian Express