The automotive industry is seeing the impact of a good monsoon, 7th pay commission and other macro-economic indicators like inflation.

Having lost the race in small cars, the Japanese car major Honda now plans to introduce newer SUVs and bigger sedans, to regain lost ground in the Indian market. The company has already planned on launching face-lifts of its current products in India.
Honda reported a drop of 28% in October Sales from 20,300 units to 15,856 units.

Hyundai achieved the highest and fastest domestic sales of 50,000 units mark within 15 months from the earlier milestone of 40,000 units. The recently launched All New Elantra, received an overwhelming response with 1,509 bookings resulting in 4-5 months waiting period. 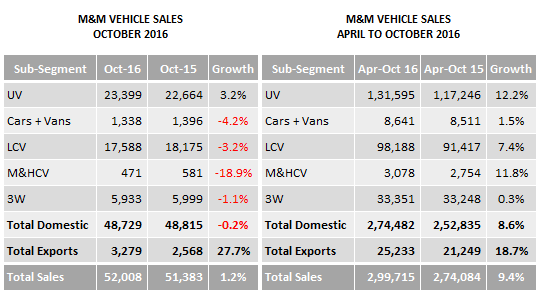 Strong festive demand propelled India’s largest automobile company’s passenger vehicle sales to a 4 year high while Tiago continued to bring in demand for the company’s products.
Commercial Vehicles business recorded the highest sales in this year. MHCV demand saw an improvement across various sectors including construction, auto logistics, cement, petroleum products and FMCG / consumer durables segments.
Its overall sales stood at 52,813 units against 43,486 units, resulting in a growth of 21.4%. YTD growth stood at 8.9% as volumes increased to 311,411 units against 286,038 units.
Exports witnessed growth of over 38% on account of strong demand for commercial vehicles.

Toyota Kirloskar Motor Sales Contract On The Back Of Production Issues

The Volvo Group and Eicher Motors JV, reported a 14% growth in overall sales with Eicher clocking in 15.4% and Volvo sales contracted by 15.3%.
Eicher Buses outperformed with a growth of 46.5% and YTD growth at 51% as the company sold an additional 230 buses during the month. The company already has a backlog of over 2,000 orders that form part of the normal STU purchase and cover the states of Andhra Pradesh, Karnataka, Gujarat and Maharashtra.

M&M FES witnessed a growth of 61% in the demand for Tractors and other Farm Equipment as total sales increased to 45,177 units against 28,081 units.
Domestic Sales stood at 43,826 units against 27,280 units while Exports stood at 1,351 units against 801 units.
The growth was attributed to the season’s rainfall that has been normal after 2 years resulting in a healthy water levels in reservoirs. Good sentiments and expectation of a better Kharif crop would drive the further growth for the year.