When we were trying to assume the NPA issue has been slowly settling down in banking sector, ICICI results reminded us that the saga continues. The bank sees an increase to its gross NPA% from 5.87% in last quarter to 6.82% current quarter. This has for some part been expected because their “watchlist” was over 44,000 cr. last year. Around 4,500 cr. of that list has slipped into NPAs.
The bank has been cutting down its corporate lending and pushing its retail division. The banks provisioning has increased almost 2 times QoQ.
The bank has showed a revenue growth of 41.31% and profit growth of 35.80% YoY. But much of that is revenue generated from stake sale in ICICI Prudential Life Insurance. If Stake sale is not included in revenue, then the revenue growth would be at mere 3.7% YoY.
The Bank has generated Rs 5129 Crs (post expenses) from offer for sale of its 12% stake in ICICI Prudential Life Insurance in the current quarter. But now it seems that, the bank hs only used all that money in provisioning of bad loans. Even in FY16 the bank sold its stake in ICICI Prudential and ICICI Lombard to generate to generate Rs 2743 Crs. This again helped as a cushion for banks provisioning scheme, which accounted for Rs 8068 Crs 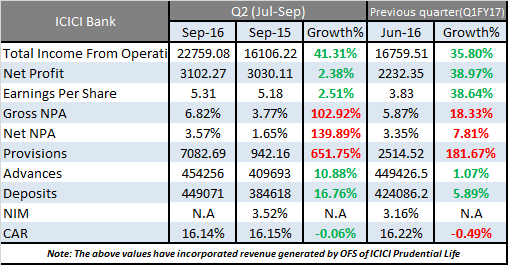 Results were released post market hours, the stock is up 2% at 285. The current trailing P/E is at 18.

Slippages continue to be a concern, and while the bank has moved to retail, the NPA problem can easily shift to retail too (where chances of recovery are lower). The problem, though, is that asset sale cushions will not be there in subsequent quarters. Despite taking on more provisions, the bank will need to provision between 3,000 and 10,000 cr. more over the next few quarters, which impacts profit. For that, a P/E of 17 is a bit much. The market however, seems to think otherwise. No positions at CM or with Authors.