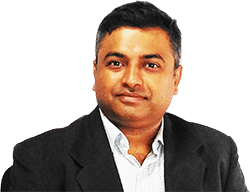 It’s time for the annual prediction post again. We are horrible at this, as you will first see in our report card. But as things go, this is one time you are forgiven for being just horrible in your predictions, so we’ll just take advantage and attempt to foretell the future.

The Report Card From Last Time

Since no one ever seems to hold us to our predictions, we will. Here’s what we said last year:

This is such a weasel-out comment. But to that we saw two 20% moves – first down to the depths of 6900 and then back up to 8800 – in the year, we’re going to say we made this one. Of course, the moves were bigger in small and midcaps.

The Indian Economy will slow down yet again. This time there will not be much jugglery to save the numbers. The slowdown will be on the back of lower discretionary spending and increase in taxes by the government, which will attempt to increase its spending through political packages.

There was an increase in taxes by the government, from introducing a dividend tax to increasing service tax to higher import duties on steel and what not. However, Indian GDP did slow to 7.1%, and discretionary spends have been lower (offset only by government spending). Political packages aren’t a big deal just yet. But I think we got most of this right. Lucky!

Bank stocks will see a LOT more NPAs coming on to their books and credit growth will fall substantially until they get their act together and raise capital. Even the best banks will see a hit, including private sector banks.

Oh boy we got the NPA bit right. The banking system report we made earlier shows the extent of the damage. Even two large private banks – ICICI and Axis – continue to reel under heavy NPAs. Banks are attempting to raise capital through perpetual bonds, so they are trying hard as well. Credit growth, as on Oct 24, is at 8.85%, around the lowest in 22 years.

Foreign investors will slow down on stock market investing. And they will get spooked by potential corporate defaults and start taking money out of corporate debt.

They’ve not slowed down much on stock market investing, though October saw net outflows. Debt markets have seen continuous outflows by FIIs, mostly in corporate debt.

With the debt markets ht, the RBI will cut rates by another 1%.

This saw only 0.25% of a cut, but much of the cut has been done by banks on deposit rates – new deposits struggle to earn over 7%.

NRIs will need to be repaid $30 billion by the banks, through the RBI hedges set up in 2013. This will be in November, but it will cause turmoil in the rupee markets from June onwards, as RBI unwinds its foreign currency forwards to collect money to pay up. The rupee is likely to hit 70 and 55, perhaps both.

While we went close to 70, there wasn’t that much turmoil and RBI seems to have gotten the act together so far. So at best it’s turning out to be an issue with liquidity, but not with the dollar-rupee equation so far.

The US will eventually hike rates and this will be a positive for all stock markets. Because, phew, it’s done.

This has not happened. Might happen in December, but it hasn’t happened in the last year. So minus one.

The government has promised to lower corporate taxes, but it will raise other taxes to pay for the difference.

As we have discussed earlier, this has happened too – way too many extra taxes. And the lowered corp tax is almost non-existent.

China’s slowdown will change its nature from an export oriented country to a consumption oriented country and they will push the Yuan as an international currency in Asia. This will need India to act but we will prefer to not do anything.

The Yuan is international now – it’s even part of the SDR. India isn’t acting. So yeah.
Overall, we had some good predictions and some lousy ones.

What’s for next year?

Let’s be more focussed on the year ahead.

Overall, we don’t have much more to predict and no stock portfolio specifically for Diwali. Much more excellent things to come from the Capitalmind team, and we don’t need to actually predict that!
Don’t hold us to any of the above. All of it will change as data comes by.
And a Very Happy Diwali to Everyone!