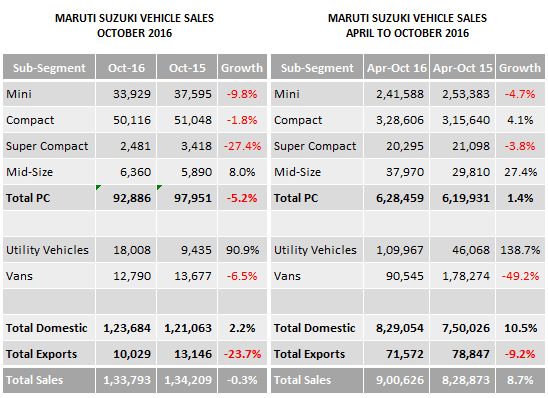 An eventful October for Maruti Suzuki announcing its Q2 results.
Maruti reported an 18% growth in Net Sales (both Domestic and Exports) on the back of a 6% growth in production. Profits almost doubled from Rs. 1,226 crore to Rs. 2,398 crore YoY while sequentially the company witnessed a 61% growth from Rs. 1,486 crore.
All the good set of numbers were attributed to higher volumes due to efficient capacity utilization, lower expenses on sales and promotion and a higher non-operating income which stood at Rs. 812 crore up from Rs. 473 crore YoY and Rs. 204 crore sequentially.

In addition to the results, Maruti Suzuki witnessed action on other fronts including speculation of tie up between its parent company Suzuki Motor Corp. and Toyota Moto Corp. Toyota President Akio Toyoda and Suzuki Chairman Osamu Suzuki both stressed that behind their tie-up was a sense of crisis about rapid technological changes in the auto industry, especially in the information technology field.
This was solidified when Maruti Suzuki decided to withdraw from the Indian consortium that was to develop and build six electric and hybrid vehicles. Maruti Suzuki cited personal plans of its parent Suzuki Motor Corp. for the withdrawal.
Strengthening its relationship with the parent company, Baleno – its blockbuster hatchback produced in India and exported worldwide, achieved a historic feat of one lakh units in domestic sales since its launch in October, 2015.
The Yen dominated Baleno will soon be exported to launched to Caribbean Islands, Uruguay, Bolivia, Costa Rica, Honduras, Panama, Peru, South Africa, Indonesia, and Middle East countries like UAE, Oman, Kuwait, Lebanon, Qatar, and Saudi Arabia in the coming months.
In other news, Maruti Suzuki confirmed that its Gujarat plant is on track to start commercial production around end of January with sales kicking off in February. While production constraint has remained its Achilles heel, to compensate for which it has had to focus on long awaited models and reduce the production of its entry segment which is now under threat from Renault KWID, Maruti has started work the new Alto – called project Y1K – to be launched by the festive season of 2019. While the hardware and technology will come from Suzuki Japan, the design, engineering and validation will be all done by the Indian team with local inputs (being done to maintain royalty pay-out in Indian Rupee)
Along with this, Maruti is likely to revamp its WagonR hatchback (code named YCA) and the Celerio small car (code named YNC) too in the coming three years as part of its plan to launch 15 new products by 2020.
The company’s Insurance arm – has tied up with HDFC ERGO General Insurance to offer Motor Insurance products to buyers of Maruti Suzuki cars. As a pilot, the insurance is being offered to the buyers of Maruti Suzuki cars in the cities of Pune, Surat and Baroda.

For the month of October, the company’s sales stood as follows: