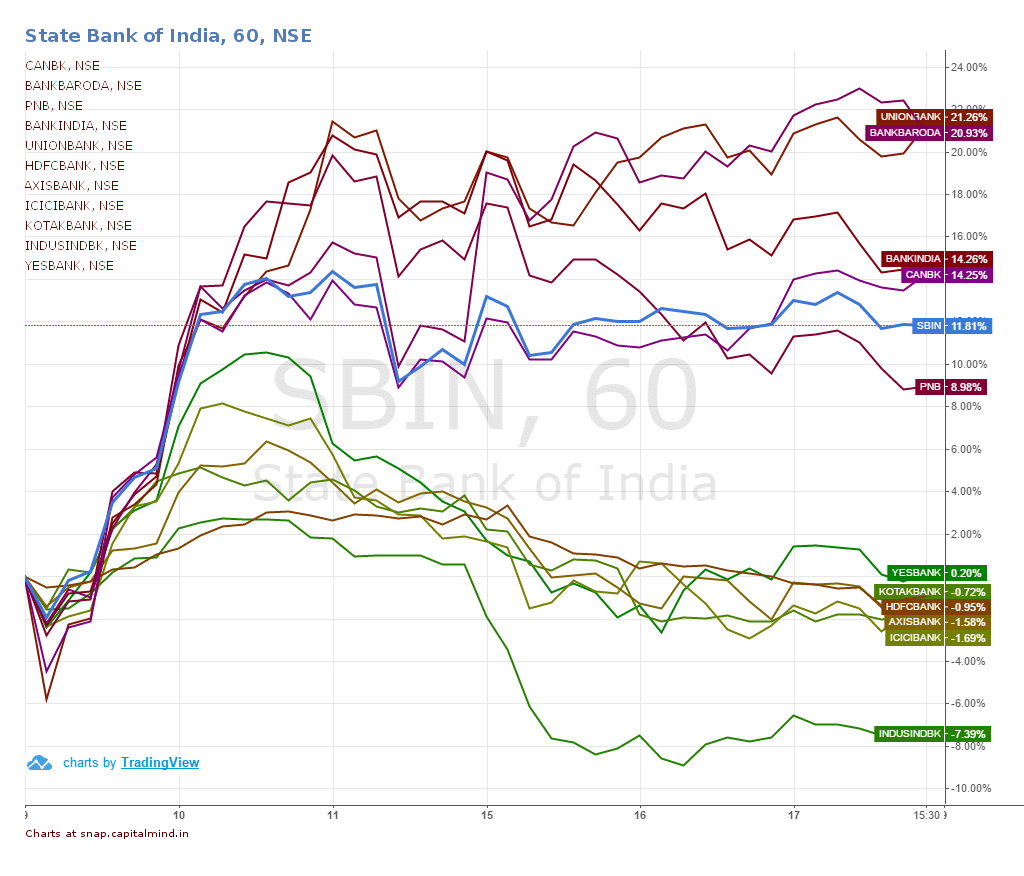 Demonetisation has been ripping the markets apart and Nifty hit a 5 month low today. With demonetisation coming into affect from 9th November most sectors have been affected from real estate to consumer durables. For some sectors it might turn out to be a short term impact but for sectors like real estate it is going to hurt for a long time.
Though the extent of impact with demonetisation scheme is unknown, but it has definitely created a negative sentiment with investors. Also with the possible fed rate hike coming up in December, FIIs are moving out their money from the Indian markets. With the bloodbath in the market, there is an anomaly: the banking sector has shown an upward trend. But  not all banks, only large PSU banks.
We compared stock returns of top 6 PSU banks and private banks. PSU banks have been seeing a uptrend. Union bank, Bank of Baroda, Bank India, Canara Bank have seen returns more than 14% in last 9 days. SBI and PNB also have given returns greater than 9% in the same period.
But on the other side of the coin, private banks like HDFC, Axis, ICICI, Yes bank, Kotak are marginally down. Indusind bank has gone down by 7%.

Why? PSU banks are undervalued (price to book ratios of less than 1) compared to private banks (P/Bs of more than 2). Some PSU banks like Bank of Baroda and Canara bank have shown resilience toward NPAs. And finally, PSU banks are benefitting temporarily with this demonetisation scheme.
PSU banks have a great Tier II/III and rural reach. They also have a higher number of account holders. SBI alone has collected more than 1,00,000 Cr deposits since demonetisation scheme. As people deposit money – and cannot withdraw too much – PSU banks get a higher quantum of deposits.
Comparatively, private sector banks have a lower advantage as their customer base is largely the upper-middle class retail customer and some high-end corporates. This base is unlikely to be depositing massive amounts of money into their savings accounts.
What banks do with so much depoists?
Banks are accepting deposits but are allowing to withdraw only part of it. There is a withdrawal limit irrespective of our account balance (currently Rs 24,000/week even if we have some 2 lakhs in our account).
Nationalized banks like SBI are paying savings bank interest on our account balance @ of 4%. But the banks are not going to take that burden on themselves. They are bidding in daily RBI auction, and lending it to RBI at a reverse repo rate (6.24% today). That means they earn an interest premium of 2.24%.
This is not huge.
For example if SBI collects 1,25,000 Cr as deposits and it lends RBI 1,00,000 Cr for one month, then SBI will be earning just 186 Crs. in the month. (Assuming their will be minimal lending). This is less than 1% of its consolidated quarterly revenue!
But, once the withdrawal limit is removed, the cash starved people will start taking out more money. Mainly the rural and semi urban class who have the least access to banking facilities will majorly withdraw. The banks needs to have sufficient liquidity to support the surge in demand, and they will need to take cash out of these RBI schemes to return money to depositors as cash. That system will hurt the PSU banks just as it helps them now.
And then, banks might get more impacted, because the demonetization has crimped public spending. This can get hit with small retail defaults, largely because people haven’t been paid (due to the lack of cash). Defaults can hurt bank lending portfolios, both in retail and corporate. A cement company that sees falling sales might just have to renegotiate its loans, because it can’t pay.
While PSU banks are rallying now, there is ample reason for them to reverse this move once cash become easier to withdraw. The impact of a massive jolt to the system will eventually be borne by the banks that have over 70% of the deposits: the Public Sector Banks.
Disclosure: No Holdings