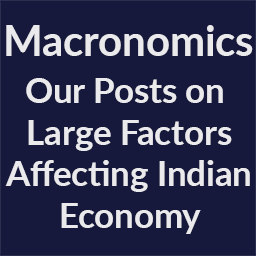 The fight against black money needs a serious rethink. The demonetization of 500 and 1000 rupee notes won’t help that much. If you have black money, you’ve probably converted it already, even at a discount. To others still waiting, there will be enough opportunities. From bank managers to temples to even renting Jan Dhan accounts. The money is going to be laundered. But there’s one thing where black money is just HUGE. And that is real estate.
People buy land, and register it at low rates. So a buyer at Rs. 3,000 per square foot will register for Rs. 800, and pay the remaining in cash. Why? Because the seller doesn’t want to disclose the full income (on which only 20% tax applies but still). And then, the buyer wants to pay lower stamp duty (which can be upto 7% of the transacted value). And then, people buy through quasi-deals – like a power of attorney. You give ABC a PoA. ABC pays you something upfront. When ABC sells, ABC uses the PoA to sell as if you were selling – you get the ‘white’ portion, and ABC gets all the cash portion.
Breaking this loop is very difficult because it’s so entrenched. But there’s a very good reason that real estate is so attractive – because the “legal” buyers get phenomenal tax incentives too.
Remove these tax incentives.
There are so many it’s almost difficult to count. And we’re written about it earlier:

We need a multi pronged approach to lower the tax incentives for real estate. A house is just another expense item, like a car, a television or a mobile phone. You don’t get any tax incentives for those, so we should be in the same line.
There should be no “income from house property”. If you own a house, and you rent it out, it’s business income. Period. Any interest you pay is deductible – fully. But there is one major distinction. You will not be able to offset such housing interest against salary income. Currently, you can do so.
If you rent out a house, you get like 2-3% yield. But the interest you pay on a loan are 9%+. The rest is a “loss”. This would be fair – eventually, when you make more rent, you will make a profit and you can offset the loss. But it’s unfair – because such a loss can be offset even against your salary! There is no other loss in any head – business, capital loss or otherwise – that you can offset against your salary. This makes the salaried folks speculate in housing property, which is unnecessary and fuels the black economy. Remove this clause, make housing income as regular business income.
Second, capital gains should not be exempt if invested in a property. Right now capital gains of all sorts can be exempted from tax if you invest the gains in a property in your name. Why? This is utter nonsense. Gains made from a house itself can be given some exemption if it’s the only property you own and you can prove that you live there. But no exemptions for second houses, or houses that you have collected rent from.
Third, repayment of housing loan PRINCIPAL should not be exempt from tax under section 80C. No other loan gives you such an exemption. Since you are building equity in your house and you can eventually sell it, this exemption is not useful. It lowers the cost of buying houses even for the ultra rich, and therefore, it should be entirely removed as an exemption.
(I would further argue that no investment should be tax free under section 80C at all. Just lower tax rates. )
Fourth, we shouldn’t give lower capital risk ratios to banks for funding real estate. Banks therefore lend at lower rates for housing versus, say, loans for durables. There is no point in encouraging people to borrow for real estate, and we should instead allow only ultra low cost housing (less than 10 lakh rupees) in non-metros. (Do not support any housing in metros – they are too crowded). This will change incentives for banks and they will raise loan rates for RE lending.
RE lending is one-fourth of all new lending in the past year, and that’s been a focus point of all banks. We should curtail that substantially, and allow credit to flow to really productive sectors of the economy. Real estate is mostly a storage for black money, and if there is no incentive for people to buy real estate, prices will remain low and stable, or even fall. Losing money isn’t appealing to black money holders too (why else is it black – they don’t want to lose money to tax). Therefore less money will come in to real estate, and strong scrutiny of all RE transactions will discourage speculation.
How will we know this has succeeded? When rental yields fall to levels that are “risk free” yields – which at this point would be about 6% or so. Rents won’t go up. RE prices will fall. And that, we will all agree, is a good thing.