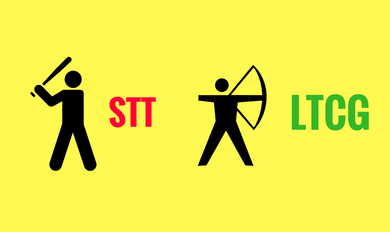 Should the Government Reintroduce Long Term Capital Gains Taxes? New Income Tax Data shows it would be a waste of effort. Except for one thing. Read on.

First, Why Get Long Term Tax Back?

The Chidambaram rule more than a decade back introduced a tax – Securities Transaction Tax or STT – on stocks traded on the exchange (and then on derivatives and equity mutual funds too). This tax was set and at the same time, long-term cap gains taxes on equity shares were moved to zero.
The idea was to promote stock market investment. And then, the STT collected would offset the loss somewhat.
Now the feeling is that Long Term Tax exemptions are unnecessary and it’s not useful to keep that exemption going; why exempt long-term capital gains from equity alone, and not, for instance, property? Or sales of private unlisted companies?
Those arguments aside, the basic deal should be – can we get more tax through Long Term Capital Gains taxation rather than by STT? Let’s evaluate. 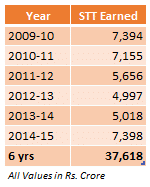 Securities Transaction Tax (STT) is a (small) tax payable on the securities transacted through a recognized stock exchange. Introduced in the Budget of 2004, the government introduced it in order to simplify the tax regime on financial market transactions.
STT is a clean and efficient way of collecting taxes from financial markets. All you have to do is ask the exchanges to pay the government. No waiting for people to file taxes, offset gains with losses etc.

And How Much Are Long Term Capital Gains?

Does it make sense to scrap STT and Get Equity Gains Taxed?

Nope. Scrapping STT will lose us Rs. 7400 cr. The LTCG taxes are currently 10% – which means, of the entire 64,520 cr., we will gain only Rs. 6400 cr.
And then the LTCG route has the problem of having to wait a year for people to declare their taxes and pay etc. The government might just do better to keep STT on.
However, remember that this is much older data. Long Term Gains are likely to be much much higher now, both because markets are higher and because of the awesome Buyback arbitrage that’s going on. The same comparison will look more tilted towards LTCG taxation if we took this year rather than two years ago.

Will the government go the Dividend Tax route?

The Finance Minister introduced a Dividend Tax on individuals this year. While DDT or Dividend Distribution Tax (of around 20%) was already being paid by the companies, the Budget 2016 introduced a DDT to be paid at the rate of 10% of gross amount of dividend received by individuals, HUFs and firms if they receive a dividend in excess of Rs 10 lakh per annum.
That means if you got big fat dividends, the company paid 20% tax, and then you paid 10% tax on it. That’s 30%. (And dividends are paid from POST-TAX profits – so the company has already paid a 30% corporate income tax before paying the dividend, and then the DDT).
Effectively, if a company distributes all profits, and makes Rs. 100 as pre-tax profit, it will pay:

What if the Government Did The Same to Long Term Gains?

Consider this: the government could similarly tax all long term capital gains if it’s above Rs. 10 lakh per year. And retain STT.
Of the 2.24 lakh people that showed long-term capital gains, only 45,000 people showed long-term gains of above 10 lakhs. Think of this – it’s a tiny population and hardly a vote bank.
While the number of returns stays small, these people had Rs. 60,769 crore of the total Rs. 64,520 crore in capital gains! That means 95% of all long-term capital gains were made by just 45,000 people.
The government would pocket over Rs. 6,000 crores just with this tax rule.
However, the market will crash big time if he ever does anything like this. Because people will just sell like crazy – such a proposal can only be in the budget, which is in February. Taxes will be applicable in April. The interim two months will see major selling. However, if the Finance Minister wants to reduce the impact, he would “reset” the buying price of all shares to the level they are at on March 31. (Meaning: even if you bought the shares at 100 and they are at 2000 on March 31, then the purchase price will be considered as 2,000 instead of 100. This reduces your tax incidence.)

Because of the heavy effective tax on dividends highlighted above, nearly all big listed companies have decided to buy shares back rather than give dividends.
Why? Because it goes like this:

And therefore, buybacks give the richest investors Rs. 100 out of Rs. 100 that is distributed. Put another way, out of pretax profits of Rs. 100, the company makes Rs. 70. If it gave dividends, what the big investor would get is Rs. 50.4. If it bought back shares instead, the big investor gets all the Rs. 70 post tax.
That will dramatically inflate the total amount of capital gains made this year, on which no tax is paid. So the earlier math might look substantially different.
However, we think that Mr. Jaitley might again put the Rs. 10 lakh spanner in the works even for buybacks, by possibly taxing long term gains above Rs. 10 lakh per year.
The basic point: Never assume that a no-tax regime lasts forever.

In this week’s edition 2 TLDR posts – where we quickly simplify the “too long” arduous stories that you “didn’t read” ...