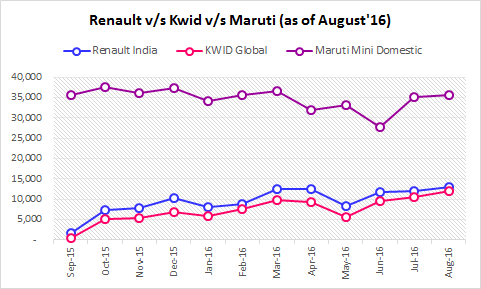 Renault India registered monthly sales of 12,143 units in September 2016 as against 1,781 units in the corresponding month last year. The YTD sales figure stands at 86,835 units against 26,559 in the corresponding period last year.
Offering a SUV-inspired stance with a high driving position, attractive exterior design and welcoming interior, modular layout and generous storage, diamond grille that gives all Renault models an immediately recognizable family resemblance – the Kwid is proving to be a feather in the Renault – Nissan Alliance in India (Interesting to note that Renault in Mexico is directed by a Mexican who used to work at Nissan, while the director of Nissan in India is a French person from Renault).
Related Post: Hero MotoCorp Rides Into The Festive Season With Its Highest Ever Sales In a Month
Nissan and Renault share engineering and purchasing center, as well produce cars on the shared plant in Chennai. The plant can build four different platforms and eight body styles on the same assembly line. Renault India cars are manufactured in the manufacturing facility located in Oragadam, Chennai, with a capacity of 480,000 units per annum. Their Alliance also results in Renault supplying Nissan with diesel engines and manual gearboxes, while Nissan supplies Renault with gasoline engines and automatic gearboxes. Today, 80% of power trains are co-developed or shared by Renault and Nissan. Renault expects the global market to record a growth of 1% to 2% in 2016 over 2015 and is targeting India growth at 8%.
The Renault Nissan Alliance was also helpful with the Kwid’s body and chassis being tested in Japan, body equipment evaluated in Korea and endurance tests carried out in France, while India became the backdrop for overall and assembly testing. (Kwid has been developed at a cost of Rs. 3,000 crore)
Related Post: Maruti Suzuki Clocks in Highest Ever Domestic Sales, Growth at 31%

The success of Kwid is highly promising and the company plans to develop a number of other vehicles based on the same platform. To date Renault has launched six vehicles (Fluence, Koleos, Pulse, Duster, Scala and Lodgy), with Kwid – the brand’s seventh vehicle which has already bagged 25 awards, which include 9 Car of the Year Awards.
One of the few reasons Kwid clicked with the Indian consumers was its SUV-inspired body, the absence of fresh models though Maruti (this can be confirmed by the fact that Maruti recently launched the renewed version of Alto800 and Alto K10 in association with M.S.Dhonic over the release of his biopic) and Tata Motors dominated the entry level segment which accounts for 25% of the Industry volumes and the presence of its dealers across India with focus on Tier 2 to Tier 5 cities. Just three months after launch in September 2015, Kwid (manufactured with over 98% localization including 60% in the Chennai region) had already won over 80,000 customers through the digital campaign for its launch through which customers were able to reserve their vehicle on line using a mobile app (Renault claims that 2,30,000 users downloaded the app immediately after its launch).
Related Post: Escorts, Maruti Suzuki and M&M Tractors Outshine Competitors, Sales Growth Over 30%
Since its launch (24-Sep), Kwid has received over 165,000 orders (25,000 orders as of 6-Oct, Touched 50,000 order on 30-Oct) and the company has been able to deliver only 88,391 units as of Aug-16.

The company has now decided to go all out chewing into the market share of Maruti Suzuki and other manufacturers. It showcased 2 new versions of Kwid at the Delhi Auto Expo in Feb-16 with
“KWID CLIMBER – built for adventure off the beaten track” and 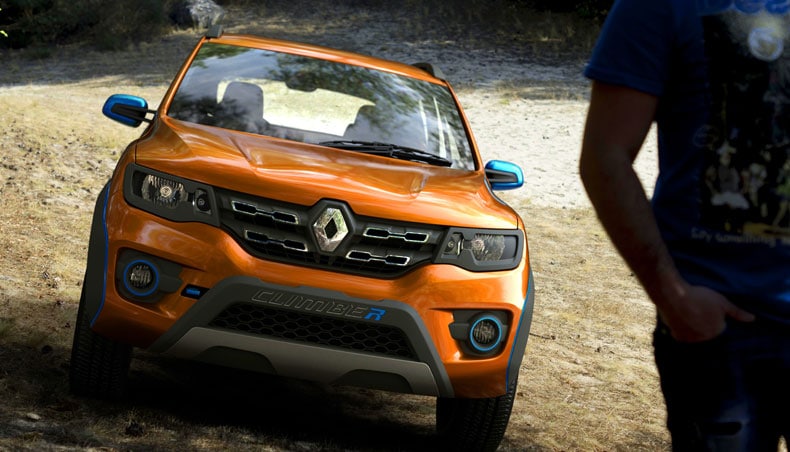 “KWID RACER – conjures up the world of racing”. 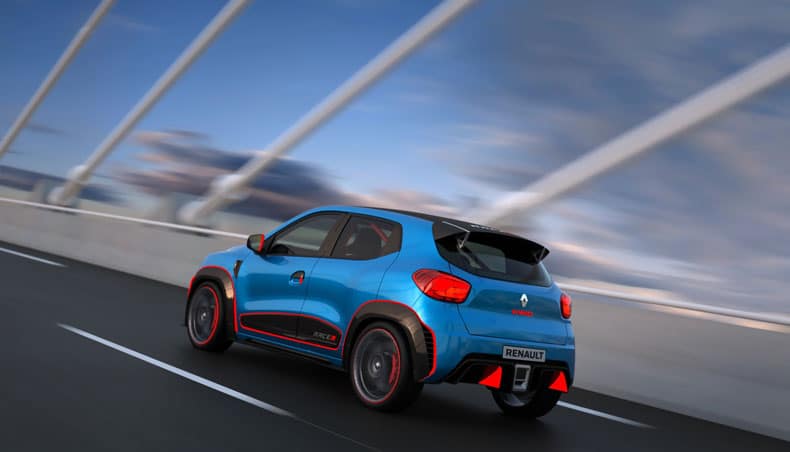 More recently the company has gone ahead with a number of initiatives: 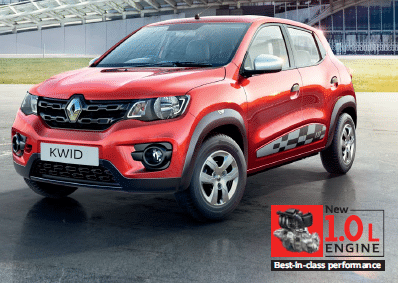 The company’s Nepal distributor has launched “Renault Cashtival” which offfers cashback of up to Rs 125,000 and Rs 90,000 on purchase of Renault Duster and KWID, respectively. The offer has been launched on the occasion of Dashain and Tihar festivals and it will be valid until the 6-Nov. 3. Not just the highest and cheapest priced, but Kwid prices vary significantly:

Renault hopes to sell a one million Kwids worldwide every year. It is also targeting a market share of 5% by 2017 and looking to export them to other foreign markets. The launch of its newer updated version with the 1L engine during festival season has been timed right.
Not everything maybe rosy either. Results for India’s ‘car of the year’, the Renault Kwid, surprised and disappointed Global NCAP. Following Renault’s latest set of improvements, the Kwid was assessed again in the frontal impact test and the model still offers just one star for adult occupant protection.
The latest version and the most highly equipped safety levels, includes an airbag only for the driver and a seatbelt pretensioner for the driver’s seat. During the test this version still showed high chest deflection, explaining the one star rating in the driver seat. 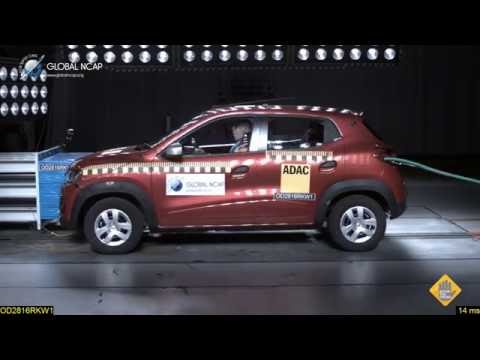