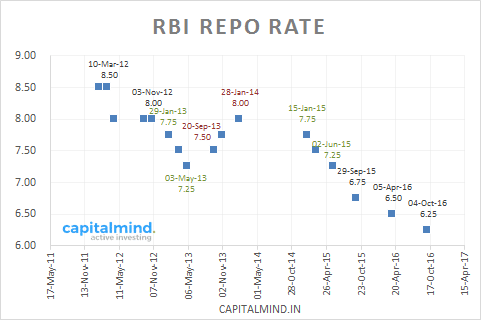 RBI has cut rates by 0.25%. The repo rate – the rate at which banks borrow overnight from the RBI – is now at 6.25%. The reverse repo rate (at which banks park excess cash with the RBI) is 5.75%. This is after inflation fell to 5% suddenly in August, which is around the target for March 2017.

This is the sixth rate cut since Jan 2015.
The rate cut hasn’t changed things much for the bond market. Yields remain steady – with the old 10 year at 6.9% and the new 10 year at 6.78%. (Transition period now, so we will quote both yields)

Will this reduce my EMI?

In all probability, no. Why not?

However, there is hope and if this rate cut prompts an increase in competition then we might see lending rates fall too. RBpo

Well, consider this. The Nifty was at 9000 in Jan 2015 when the rate cut cycle STARTED. It’s 1.75 years more now. And still we are seeing a Nifty at 8700. And company earnings have fallen. And inflation is  down.
All these factors tell you just one thing: Don’t go on theories. The market will do what the market wants to do.

Well, Urijit Patel is the new Governor. And the policy is determined by a Monetary Policy Committee – and rates are by majority vote rather than by dictat of the governor. The MPC will meet for two days and get very very tired, apparently, looking at the 15 minute abrupt press conference, and only then will they issue the policy statement.
There’s also this whole Liquidity Thing.
Given the massive excess liquidity and the stable rupee, it’s quite likely that the RBI has been buying dollars even as FIIs have been pumping money into India. Which eases a lot of the trouble we have been thinking about with respect to the FCNR exits that happen later this year.
A few other things they have done: