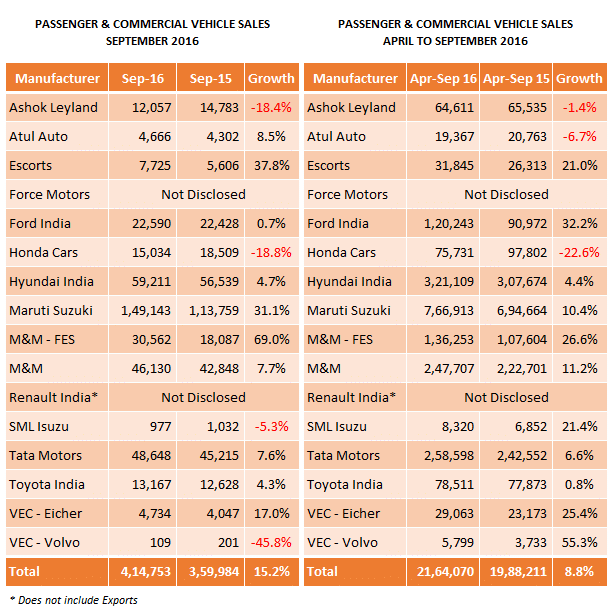 Earlier during the month, AL parted ways with the Japanese auto major Nissan Motor Company after a period of 9 years. Ashok Leyland bought the partner’s stake in the three joint venture companies i.e. Ashok Leyland Nissan Vehicles Ltd (ALNVL) for vehicle manufacturing; Nissan Ashok Leyland Power Train Ltd (NALPT) for making power trains and Nissan Ashok Leyland Technologies Ltd as per the agreement signed on September 7, 2016.
Ashok Leyland will continue to build under a licensing agreement light commercial vehicles Dost and Partner, which are based on Nissan’s design, engineering and technology. In addition, the two companies have agreed to continue a deal to procure made-in-India parts to Nissan.
AL has stepped up its expansion plans. AL is planning to build multiple satellite plants in Africa, Asean and Latin American markets. These assembly plants, which could be completely or semi knocked down (C/SKD) plants, will put together vehicle parts shipped from Ashok Leyland’s India-based plant before retailing them in local markets.
It has also stepped out is product portfolio and is geared to foray solo in the light commercial vehicle (LCV) space after separation from partner Nissan. AL is planning to introduce 8-10 different models (first of the new products would hit the market as early as next six months) over the next 2-3 years with an investment of up to Rs. 400 crore.
Ashok Leyland Managing Director Vinod Dasari said:

“We will add a lot more models. We are planning on our own and we will have a bunch of new models coming in. We will have a full range of LCVs over the next 2-3 years”

“Good monsoons, the Seventh Pay Commission and reasonable inflation are helping drive the Indian automotive industry. The festival season has started on a promising note and we expect the excitement and enthusiasm for our Ford product portfolio to increase during the season as we and look forward to welcoming many more customers to the Ford family”

Here is what CIL President and CEO Yoichiro Ueno said:

“Honda’s sales have been steadily growing during the past few months. Our enquiry levels have seen a significant increase since the beginning of this festive season and we are looking forward to continuing good sales momentum through October.”

In the domestic market, Hyundai’s sales saw a marginal increase at 42,605 units last month as compared to 42,505 units in September last year.
Exports grew 18.3% to 16,606 units as against 14,034 units in the same month last year.
Commenting on the performance, HMIL Senior Vice-President (Sales and Marketing) Rakesh Srivastava said:

“In the domestic market, sales were mostly driven by products like Creta, Elite i20 and Grand. We hope that the festive season will see a benchmark growth in the industry with the evenly spread monsoon along with the 7th Pay commission building positive sentiments in the market.”

You can catch the detailed analysis of here:  Maruti Suzuki Clocks in Highest Ever Domestic Sales, Growth at 31%

The $18 billion conglomerate with a strong presence in the agribusiness, aerospace, components, consulting services, defence, energy, industrial equipment, logistics, real estate, retail, steel, commercial vehicles and two wheeler industries reported a 7.7% growth in total sales at 46,130 units against 42,848 units in September, 2015.
Sales of Utility Vehicles witnessed a timid 2.6% growth while that of Cars witnessed over 50% growth (though lower in terms of volume).
Related Post: Hero MotoCorp Rides Into The Festive Season With Its Highest Ever Sales In a Month “A good year and a normal spread of monsoon as well as new vehicle launches have helped the auto industry perform positively. We hope that the upcoming festive season brings in better demand due to improved sentiments.”

“The recently launched Innova Crysta has received an overwhelming response from the market including the Delhi and NCR region. Lifting of the ban has opened the order flow for Innova Crysta diesel vehicles in Delhi resulting to an average waiting period of 1.5 to 2 months. We are trying our best to bring the waiting period down so as to serve our customers better.

Our newly launched Platinum Etios & Etios Liva has also received good response from the market. We would like to thank our customers for placing their trust in our products.”

Escorts Agri Machinery (EAM) sold 7,725 tractors against 5,606 tractors during September, 2015. While YTD its exports are down 21%, a similar positive number is reflected in the Domestic Sales.

“We expect the good momentum to continue with the upcoming festive season and the effect of a good monsoon. In the export market, we sold 1,527 tractors with a growth of 48% over September 2015.”