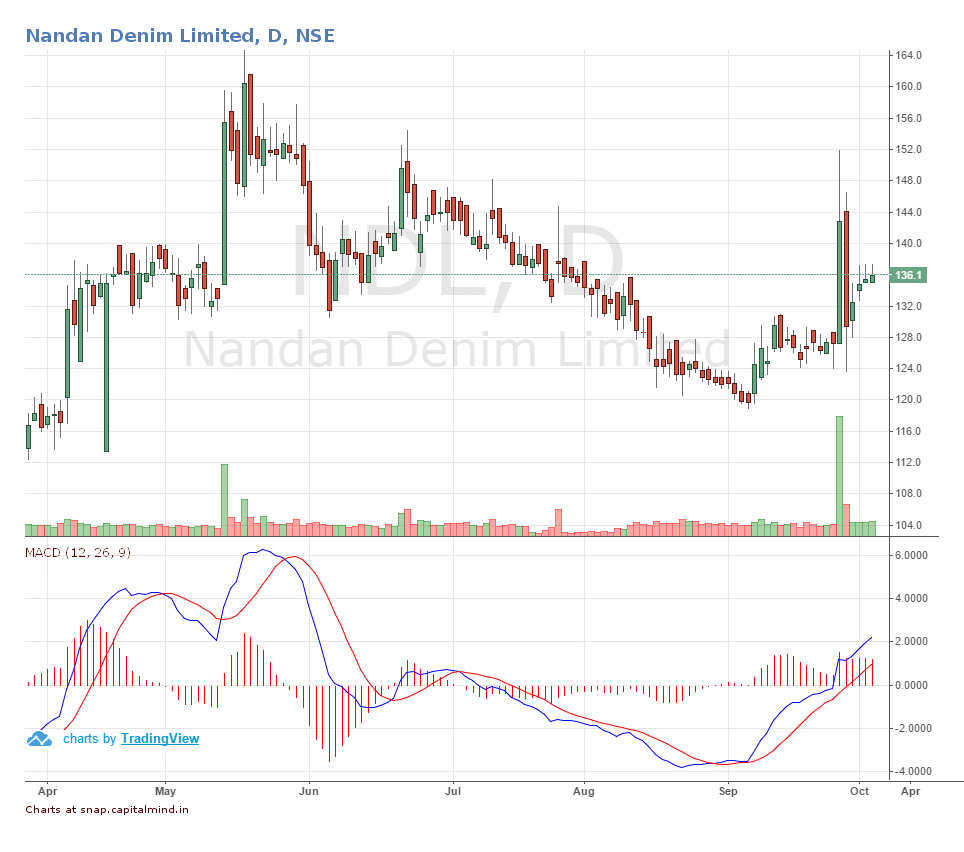 A Gujarat based textile company, Nandan Denim has yet again issued warrants. This time the company is issuing 50 lakh shares for a price of Rs 200 each raising Rs. 100 cr. Two FII funds, LTS investment Fund and LGOF Global Opportunities have been issued 25 lakh warrants each. The company will be raising Rs 100 Crs. if the warrants are exercised. The warrants are valid for 18 months.
The company in its announcement has said that, the fund raised via warrants issue will be used for its growth plans, investment in its proposed subsidiaries, meeting long term working capital and also improving its current capital structure.

Post announcement the stock shot by 11% and closed at Rs 142. It has since retreated substantially.
Last year also, company raised Rs 50 Crs by issuing 25 lakh warrants at Rs 200 each to Polus Global Fund. Polus global fund exercised its options in May 2016. The reason for raising funds was stated as, the company was in middle of its capex outlay of Rs 612 Crs for capacity expansion (including denim, spinning and shirting). The capex had requirement of funding to the tune of 30% via equity infusion.
Read the complete article by Capitalmind on last year’s warrant’s issue here. 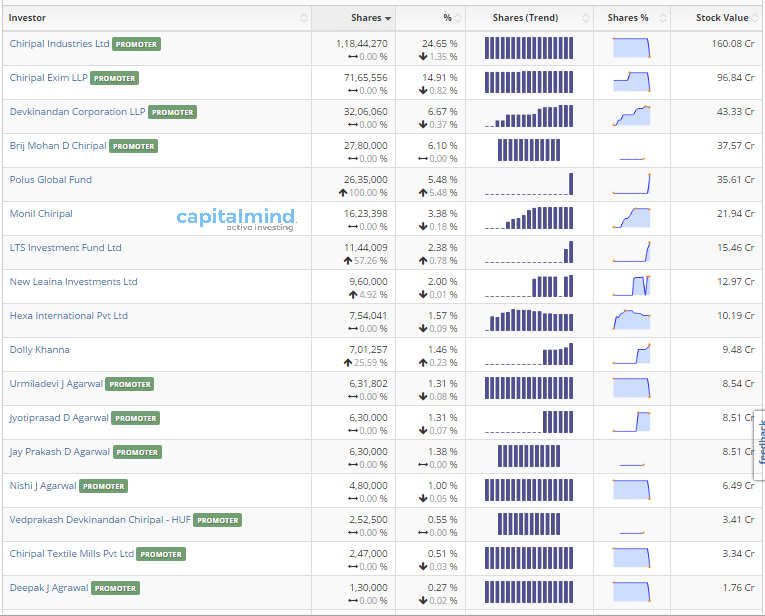 Are they really paying 57% premium?

We need to read between the lines. If we go by the company’s announcement, then LTS and LGOF are paying a premium of 57% from CMP. But it’s not true. Lets do the math.
Assuming the current market price to be Rs 127 and total outstanding shares being 4.8 Crs. the total market cap will be at Rs 610 Crs. Now with 50 lakh warrants being exercised at Rs 200. The total outstanding shares increase to 5.3 Crs and market cap will increase by 100 crs (Rs 200 multiplied by 50 lakh shares) i.e at Rs 710 Crs.
Now theoretically the share price should be at Rs 133.88 post issue. So ideally the LTS and LGOF are paying a premium of 49% (on a market price of Rs 133.88).
All said and done 49% is still a large premium to pay!

Why Pay A Premium?

Their have been many theories and speculations of why FII’s are investing in Nandan Denim’s with a higher price of Rs 200 when the current market price is Rs 127. even last year Potus Global converted 25 lakh warrants worth Rs 50 Cr at Rs 200 each, when the market price was at Rs 135 levels. And now LTS investments and LGOF both are alloted 25 lakh warrants each at Rs 200/share.
They will only pay a part of the money now – just about Rs. 25 cr. or so (1/4th). The rest comes in installments and they can exercise after the last installment has been paid.
This curious buying of shares by FII’s at a higher price than the current market price has been questioned. Lets see if these theories can reason out with the current case.
Theory 1:
This one is the most obvious one. LTS and LGOF might exercise the shares only if the market price of the shares exceeds Rs 200. This one for a moment seems right. But if we look at the previous warrant conversion of Potus Global, it seems something is fishy. They have exercised the warrants when CMP was at Rs 135! So this logic falls by the wayside.
Theory 2:
Why not buy from the market? Assuming LTS and LGOF wants to buy 25 lakh shares each, then they will end up with 5.20% of total shareholding each. With a 1.47 Cr (30.71%) shares held by public, if both the companies want to buy 25 lakh shares each, then they need to gobble up 33% of the shares held by public. The share price might end up rallying higher than Rs 200!

The stock value of non FII holdings is just 200 cr. If you tried to buy 100 cr. worth of that stock, you’d see the stock price going up like crazy.
This theory holds good unless the FII’s/FPI’s are desperate to invest in Nandan Denim.
Theory 3:
The current policy of the company states that maximum aggregate limit for holding shares by FIIs/FPIs is 24% (which is they are planning to change to 49%). Now assuming LTS and LGOF wants to invest 100 Crs together, then they would need to buy 78.74 lakh shares at Rs 127 each. This would end up FII’s/ FPI’s holding 27.40% of the total shareholding. This according to the current policy is not possible. This theory also fails when premiums are considered. Public will not just give away their shares like that. They need to be compensated enough with premiums. If we assume FII’s and FPI’s are ready to pay an premium of Rs 28% (which is till better than 49%) with a buying price of Rs 162 (We arrived at this price just to make it fit in the below 24% clause). Then the buying price will be Rs 162. So to make an Rs 100 Cr investment, you need to buy 61.72 lakh shares. This would end up with FII’s/FPI’s holding 23.86% of total shareholding of company.
Essentially there is a liquidity premium for the company, and in two years three different FIIs have been happy to pay a big premium to get a chunk of stock.
Is the premium paid worth it?  Lets look at Nandan Denims tech specs.

While the stock is very interesting, the fact remains that it’s been stuck in a range for two years, and growth on profits too has somewhat stalled now. The FIIs that seem to be buying in don’t inspire a lot of confidence yet, but they are buying and paying a premium.
The high debt may not be such a big problem, in a falling rate environment but it’ll be more scary in a rising rate environment.
A story like this always gets our ears up. Either the FIIs are being played, or they know something we don’t. In general this share should show a major increase in profit in the next year, otherwise justifying the 10% dilution becomes difficult.
While we do not hold or recommend this stock, it’s going to be a study in understanding how some of these preferential issues work – if the stock does go up big, the warrant buyers are heroes. If not, they just made a terrible decision. We’ll track it.
Disclosure: No positions, no recommendations.