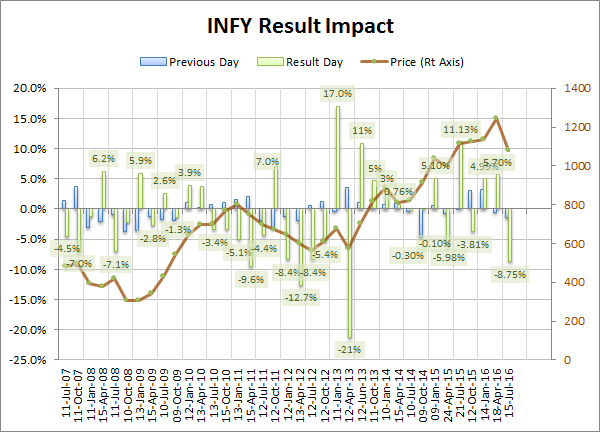 Infy results are tomorrow and the market generally boes bonkers on their results. The stock tends to be super volatile on result day, and here’s how it performs:

The median move is between 5% and 6% (either direction) each time.
Given that, the market has actually priced in some crazy volatility for tomorrow – about 44% on Implied Volatility on Infy options. We plot how crazy it is in terms of the IV. On Snap (http://snap.capitalmind.in/charting/fno?sym=INFY) we can see the IVs and the IV Percentile.
(IV In red below and the percentile in blue) 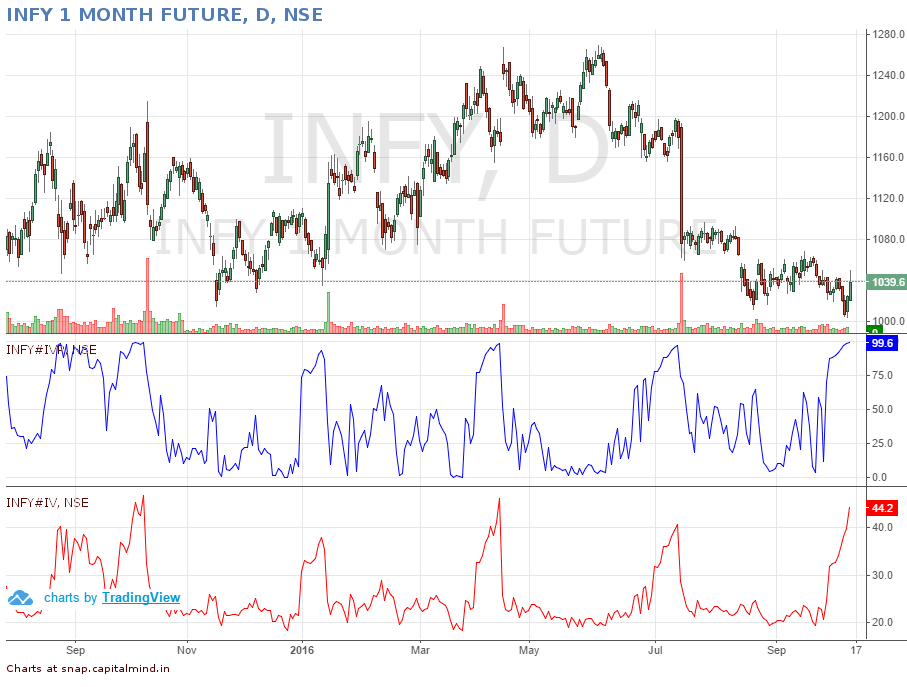 As you can see, the implied volatility is very high compared to its past. The percentile just tells you that if you put all the IVs of the last one year together in ascending order and looked at where the current IV is as a percentile of that, you get a number between 0 and 100. The closer to 100 it is, the higher the IV is.
What this malso means is that the IV falls after results, big time. It makes sense to write options, since the IV is going to drop – and writing options means you sell them at high IVs (high prices) and buy them back at lower IVs (low prices). What you want is that INFY doesn’t move too much.
We took an experimental trade today in the Premium slack channels.  This is an option spread that will benefit if Infy doesn’t fall 10% or more, and will benefit from a fall in IV as well, and will be okay if Infy went up any amount. The nature of the beast is that you do not know how it will work, but if you consider that:

Then it makes sense to take the risk. You do have “unlimited” loss in an option strategy, theoretically, but in practice risk is always somewhat limited.
Infy, in general, is not expected to have great results. There are some warnings, some issues around IT in general, the Brexit/Pound impact and so on. An option strategy in a stock like Infy might be exposed to these risks but given how much people are willing to pay in terms of premium for such a time, it just might be better to take a calculated bet that it won’t hit an extreme fall. Let’s see how it goes.