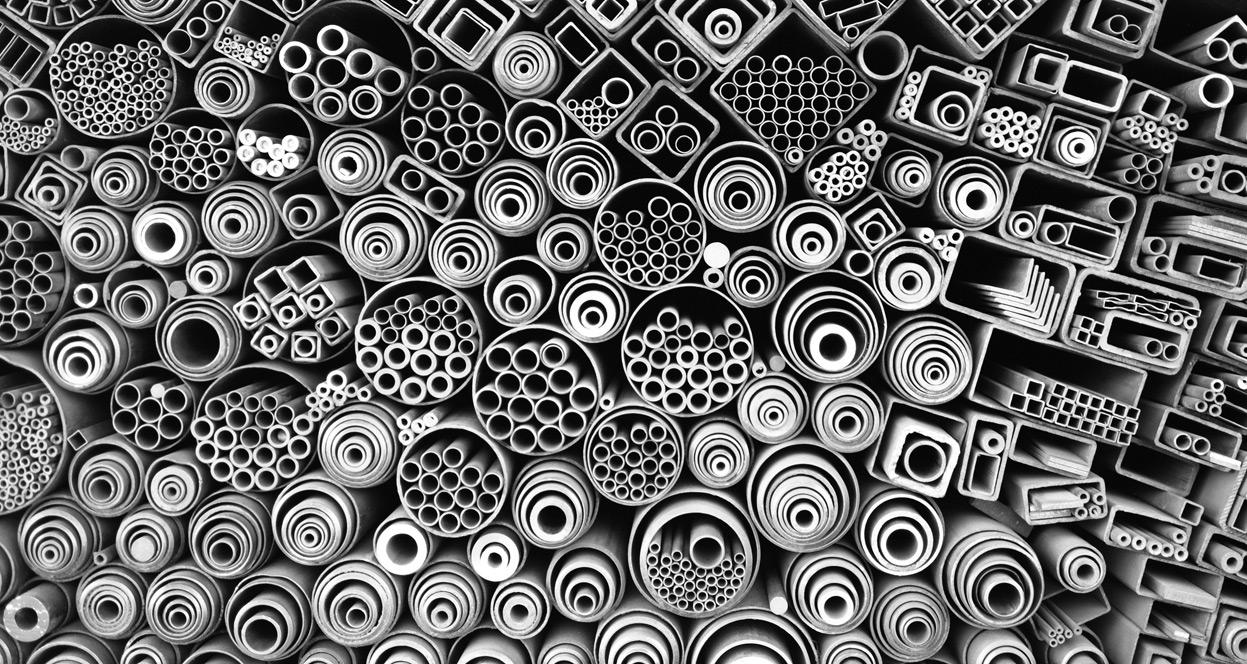 Government has yet again extended the Minimum Import Price (MIP) for steel products for a further period of two months until December 4, 2016.  The policy is valid for 66 steel products which have not seen much growth in last 8 months and have foreign providers pricing at predatory levels. This is the second time the government has extended the policy. The first extension was given for two months on Aug 06, 2016 after the completion of initial six months implementation of the policy starting Feb 2016.

Why Was MIP Required?

The MIP which came into effect in Feb 2016, has been a boon for the ailing steel industry.
Since the last calendar year China has seen increased production in steel and coupled with yuan devaluation, their steel is quite cheap. To add to that, even South Korea and Japan have been dumping cheap steel in the  international market. Steel imports went up and local players saw a massive dip in sales. Many steel industry loans were being classified as stressed assets. It was at this time that the government stepped in and decided to put a minimum import price for steel items under 172 HS codes. Which will bring imported steel price at the same levels of domestic steel. This policy ensured the steel industry revival in India.
The Indian Steel Association has been continuously lobbying to extend the policy for another six months. They will enjoy this cushion for almost 10 months now (including the next 2 months), but how long? This policy cant go forever and China doesnt look to stop dumping its steel in international market any time soon. In the guise of protection we are only increasing domestic steel prices compared to what’s available abroad – and that won’t help us.

Steel and its product forms basic raw material for many domestic industry, mainly the automobile industry. Auto companies and its component makers cannot take much advantage of low international steel prices. The companies may not see much improvement in its operating margins due to higher domestic steel prices.

We too were not sure, until we looked into import and export data of Iron and Steel. The Q1 results of steel industry cannot quantify for the extension for MIP. But if we look from import and export point of view, then we can understand how the MIP has helped the steel industry.
Imports Have Plunged.
If we look at the below graph, the iron and steel imports have been seeing a downtrend since Aug-15. The downtrend from Aug-15 to Feb-15 can be attributed to economic slowdown (the infra sector etc). But post implementation of MIP in Feb 2016, the imports dipped by almost 30%. 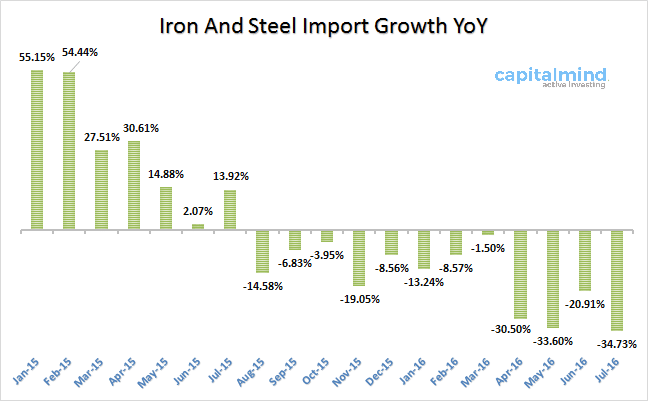 Note: Data for Aug-16 and Sept-16 is not available
Revival of Exports
Indian Steel Exports have been declining ever since their has been oversupply of cheap steel in International market. But things are turning around now, the long slumber of de growth in exports has been broken. For the first time in last 18 months, the steel exports have seen a rise, even if it’s temporary. 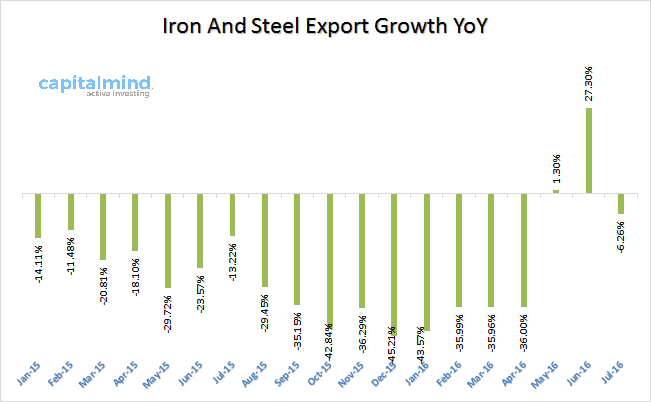 China is the worlds largest producer of steel has been very reluctant to cut down steel production. China’s had significant subsidies for its steel companies, who now can produce a lot of steel at a very low cost. Korea and Japan too subsidize steel exports. (India imports a lot more from Korea and Japan than from China).
But things are changing. Coking coal prices (which is used to make steel) are going up, as are iron ore prices. Steel prices are up mildly. Chinese residential property prices are up significantly from last year and that’s also adding to demand. And then, there have been large plant shutdowns in China.
Even then, there is a potential for another increase in supply as China is actively curbing residential price speculation, limiting growth by government entities and plants are now back online. Indian prices too are being considered unfavourable – the US has put anti-dumping duties as much as 58% on Indian steel exports to it.
The game of keeping steel prices high for domestic industry while lowering the cost of exports through subsidies is one that is played by all major steel producers. India too is playing its role here. At some point we should stop and let the lower price trickle through. Not for two more months though!