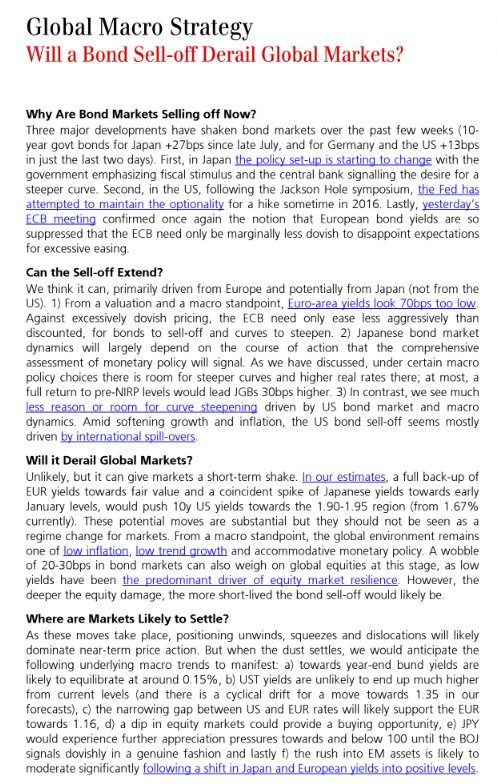 Here is a brief summary of some of the interesting things discussed there in the last few days:

#bonds-funds: Do not invest in dynamic equity equity if you wish to chase returns

Dynamic equity funds or dynamic asset allocation funds change their equity:fixed income allocation depending on market conditions. Here is why those who wish to chase returns should not invest in such funds. (Link)

Foreign direct investors using Mauritius to bet on Indian stocks are already beginning to feel the end of a zero-tax regime. The tax office has started questioning the claims of their nominees — special purpose vehicles and entities floated in the tax haven — for tax benefit. (Link)

Bank fires at least 5,300 people who were involved in the scheme, which racked up $2.6 million in unauthorized fees. (Link)

Investors reacted like the sky was falling on Friday. Commentators mostly blamed the -400 point decline in the Dow on heightened probabilities for a September rate hike by Janet Yellen and her fellow Federal Reserve colleagues. Geopolitical concerns over a crazy dictator in North Korea with nuclear weapons were identified as contributing factors to frazzled nerves. (Link)

#macronomics: Fed Will Kick Off the Market Meltdown

The market took a beating on Friday to close the week with a loss, but don’t worry — the true panic selling hasn’t kicked in yet … but it’s coming. (Link)

DoubleLine’s Jeffrey Gundlach indicated in a webcast on Thursday that financial markets are on the brink of turmoil, saying “this is a big, big moment.” He’s right. It is.  (Link)

#bonds-funds: What Happen if you Miss Your Mutual Fund SIP installment?

Systematic Investment Plan (SIP) is a regular and disciplined way of investing money in mutual funds. SIP allows you to invest a certain pre-determined amount at a regular interval (weekly, monthly, quarterly, etc). SIP helps the investor inculcate the habit of saving and building wealth for the future. (Link)

#general: Deutsche Bank: Bond Investors are About to Get Crushed as a New Global Cycle Kicks Off

Weak growth, higher inflation, and stagnant productivity in developed countries will roil bond investors in the decades to come, as the benign global forces that have buoyed returns on financial assets for the past 35 years stage a sharp reversal. That’s the big-picture call from Deutsche Bank AG analysts who predict an oncoming lurch towards trade and financial protectionism — combined with aging populations and weak worker output — will intensify financial repression as a new multi-decade-long economic cycle kicks off this year. (Link)

Eleven of India’s banks will likely be in danger of breaching capital triggers with the coming increases in minimum requirements under new global banking norms, Fitch Ratings said on Monday. (Link)

The fall in retail inflation, as per data released by the Central Statistics Office (CSO), was thanks to a rather sharp drop in the annual food Inflation– from 8.35 per cent in July to 5.91 per cent in August. (Link)

According to PhoneRadar, Reliance Jio is offering the Jio Fiber Broadband for public testing under the GigaFiber Welcome Offer. We also managed to get a peek at the broadband plans, which apparently start at as low as Rs. 500 per month. (Link)

Flagship scheme brings range of benefits to poor. There’s a catch. Many officials are quietly depositing Re 1 from their pockets to erase zero-balance accounts — and dress up the data. (Link)

Saudi Arabia and Iran are increasing oil production right ahead of a critical OPEC meeting when members are expected to discuss freezing output.
The rival producers each boosted output by more than any other nation in the OPEC group of oil exporters last month, according to a new OPEC report on world oil supplies. (Link)

#fx-commodities: What it costs to produce oil

The collapse in the price of oil has squeezed energy companies and countries that were betting on higher returns. Here’s what it costs on average to pump a barrel of oil in the 20 biggest oil producing nations. (Link)

Linking of Aadhaar cards with train tickets would be mandatory effective December, 2016, which means that passengers who don’t have Aadhaar Card, won’t be able to issue train tickets. (Link)

#macronomics: TRUMP: Janet Yellen should be ‘ashamed’ of what she’s doing to the country

GOP presidential nominee Donald Trump told CNBC on Monday the Federal Reserve is doing what President Barack Obama wants by keeping interest rates low.
Fed Chair Janet Yellen and central bank policymakers are very political, and Yellen should be “ashamed” of what she’s doing to the country, Trump said, adding the Fed is not even close to being independent. (Link)

#general: Government to fix prices of essential items, even packed ones

Once the central or state government fixes and notifies the retail sale price, retailers cannot sell essential commodities such as pulses, sugar, milk and edible oils at higher prices in the guise of selling such items in packets. (Link)

Island reversal bottom in 30-year TSY yield. Scary to be on the wrong side of this. U.S. Treasury bonds — backed by the full faith and credit of America — are considered the safest investment in the world. (Link)

#stocks-from the past: Demand in hydrocarbon sector, international pipeline strong

EIL Engineers India’s bet on the international sector is paying off, with about Rs 100 crore revenue accruing from there and margins coming back up to 20 percent. (Link)

Although the seasonal temperature cycle typically peaks in July, August 2016 wound up tied with July 2016 for the warmest month ever recorded. (Link)

The reported negative growth in capital goods segment is a distortion being magnified by one particular industry. (Link)

The 2016 edition of Mint SecureNow Mediclaim Ratings brings you a medical insurance ratings to cut through the clutter. (Link)

Short-term borrowing rates are rising to the point where some heavily indebted U.S. companies can no longer ignore them.
A benchmark for near-term borrowing, the three-month U.S. dollar London interbank offered rate, has risen above 0.75 percentage point. (Link)

Just four months ago, Donald Trump said he had ‘great respect’ for Janet Yellen, and warned raising rates ‘would be a disaster’. (Link)

More than the disruption itself, it is the velocity of change that constitutes the biggest threat to companies. (Link)

An estimated $26 billion that the Reserve Bank of India raised in foreign-currency swaps from non-resident Indians to support the exchange rate in 2013 starts falling due this month, of which the central bank predicts about $20 billion will leave the country over four months. (Link)

#macronomics: How China Is Reshaping Market Correlations in Asia

As we trundle on in the aftermath of the “Brexit” result of the recent British EU membership referendum, the surprise, and perhaps shock for many analysts and investors has begun to be digested – the Earth remains constant on its axis and the sun still rises. (Link)

Firms from Asia’s third-biggest economy have raised $3.56 billion since July 1, the most since the period ended March 2015, taking advantage of record-low borrowing costs. The average yield on the debt sank to 3.81 percent last week and has fallen 59 basis points over three months, faster than declines seen in China, Malaysia and Thailand, JPMorgan Chase & Co. indexes show. (Link)

Apple Inc is planning to bring back in-house some of the back-end technology work that it had earlier outsourced to Indian technology services vendors.
The company is likely to start with “insourcing” the support for Apple Stores — nearly 500 of them are in operation across 19 countries currently — before moving on to other services that were earlier outsourced. (Link)

Japan’s bank stocks are the most volatile relative to the broader equity market since the financial crisis as investors wrestle with whether the central bank’s next move will be a help or a hindrance to lenders. (Link)

#macronomics: Is The Fed Surreptitiously Tightening?

Disowned For Being A Millionaire: Why I Still Won’t Buy A House – Link
Embracing Panic – Link
Is Option Gamma as Important as Delta?  – Link
Review your Health Insurance Portfolio – Are you covered of all Risks? – Link
The expensive lesson of closet indexing: avoid low active share and high expenses – Link
Trading Shortcuts – Link