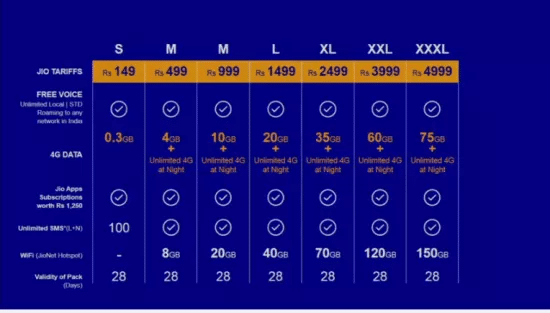 Reliance is disrupting the game again in telecom. A decade after it launched the ultra cheap mobile phone and forced every operator to cut rates by half or more, Reliance is now opening up the “Jio” platform as a much much cheaper data service.
Here’s what we see of the Reliance Jio service.
Firstly, to all users, for ever, voice calls are free. This could be because they run calls efficiently over data – whatsapp and skype are already doing this very well, and charging for calls on a per minute basis is so last-century. Oh, and even roaming is free.
Second, they have spoken of removing artificial tarrifs, like a big upfront fee to get cheaper data later and so on. These are stunts that other telcos have recently been trying.
Third, the packs they have arent very cheap. For a Rs. 499 pack for 28 days you get 4GB, but the stuff below that is a crappy 300 MB for Rs. 150.

How does this compare? I currently pay Rs. 300 for a 1.5GB pack that I share with my family, and then Rs. 200 for about 32,000 seconds of voice calls – which typically is my monthly bill. With Reliance Jio I will get 2GB more and some other features for the same price. This is not pathbreaking just yet, but about 25% to 50% cheaper.
Third, Reliance will install hotspots at a million locations, and that will give you free wifi (to the limits of your plan) if you use it at those locations. That’s not a bad option if the locations are well spread out.
Fourth, they also have a router which you can use for data with your current smartphone. That will also change the game, because then you use it only for data (no free voice calls). The tarriffs for this aren’t clear yet, but if they get this down substantially it can hurt many of the fixed line players too, and get them connectivity in areas where last mile connectivity is a problem (which is an issue in some parts of many cities).
They offer things like a massive music and video directory, free TV (with auto recording so you can rewind and see past programmes easily) and other content as part of their subscription, which is free till the end of 2017. Then on, it might cost 16,000 per year.
Anyone can get a SIM using Aadhaar authentication apparently, so no docs needed. And then, everything’s free till December 31. This means you can do everything you want to do this year testing their network.

For you and me, yes! Cheaper data is welcome. Free calling is also welcome. Currently the plans are expensive, but the plans mean nothing. They are giving everything free till December 31. Do you think they will actually reveal their final charges before that? No – and I think the eventual plans that come around will be substantially cheaper than the current sent (and they’ll have stuff starting from Rs. 50 per month). The current plan set is shown only to confuse the competition, it has no real meaning.
But it’s horrible for Bharti, Idea and Vodafone. Because they were leeching money off data and providing crappy service. So much that even if Reliance was more expensive and provided good speeds, I would shift – at a lower price it’s a no-brainer. This isn’t just me, it’s way too many people for comfort.
Their share prices have fallen. Bharti and Idea are down 6% or more in trade today. Vodafone isn’t listed and is probably rethinking its listing plans as we speak. This will hurt margins, and require them to invest in infrastructure.
And then, what happens to the spectrum auctions later this year? Will there be aggressive bidding, or will they tone it down so that the lower cost means a lower price to the consumer?

Our View: Not Great For Shareholders But Brilliant for Consumers

Reliance Jio has a lot of money. It’s even able to raise at 8.3% for five years (in fact today, one of its 2021 bonds traded at 7.9%!) and even cheaper than that in the short term. None of the others get that level of kindness with the possible exception of Vodafone. So they have to work harder to compete, but the fact is that they are already entrenched so their head start allows them to push through any competitive plans to customers.
Shareholders of all companies – Idea, Bharti and Reliance – will suffer, since profitability will come down. That’s okay in the longer term, but please, no one cares about the longer term. If more Indians come on board and use more data, the eventual price they will pay is a certain wallet share they already are paying. But it appears it will take a bloody battle to get there.