Have you ever wondered how traders with big pockets and lots of holdings trade?  What if we analyzed some of the Big Whales holdings.. Sorry.. not holdings but tradings?
How do we do this? It wasn’t an easy task. We have to look at the Annual Reports of companies where an investor is reasonably big, and they reveal the additions and removals of shares in the year, of each of the big investors. (Typically, 20 investors or so)
Of the 31 Big Whales, the one Big Whale that made the most sense to “investigate” was the Big Bull himself, Rakesh Jhunjhunwala.
So this meant that we had to look at the Annual Reports of all his invested companies which were 31 in total that we knew of.
You can view the complete portfolio of Rakesh Jhunjhunwala’s holding and 30 other Big Whales in our report here: Portfolios of Top Investors in Indian Stock Market – Big Whales Report – June 2016 (For Purchase, Rs. 999 only).
Of the 30 invested companies (we exclude Tata Motors DVR), we had to exclude many since they were not friendly enough with their data:

So now coming to the remaining 10 companies. We exclude Fortis from this since the only transaction was an intra day trade on the 29-Jan.

Here is how the performance stood for the remaining 9 invested companies. 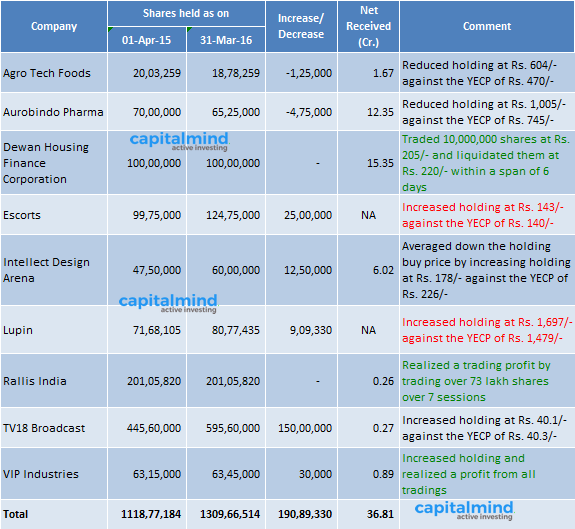 Here is how the trades spanned across each stock: 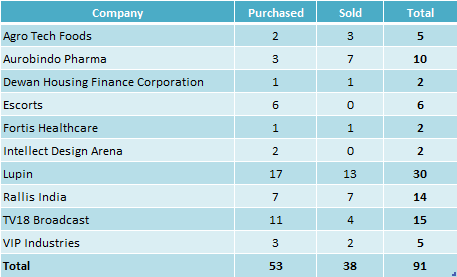 Obviously, this is not exhaustive. Many companies only reveal transactions of their top holdings, and RJ may be a smaller shareholder in many companies. And then, we don’t know what other accounts he might have traded from (he also owns Rare Enterprises etc.). But this gives you an indication of what’s happening with some of his larger holdings.
Hope you have found this article useful. Do leave your feedback in the comments section below.
Disclosure: We may have advised some of the stocks as part of our premium portfolio’s and have market positions in them. Please assume we are biased.

You can view the complete portfolio of Rakesh Jhunjhunwala’s holding and 30 other Big Whales in our report here: Portfolios of Top Investors in Indian Stock Market – Big Whales Report – June 2016 (For Purchase, Rs. 999 only)