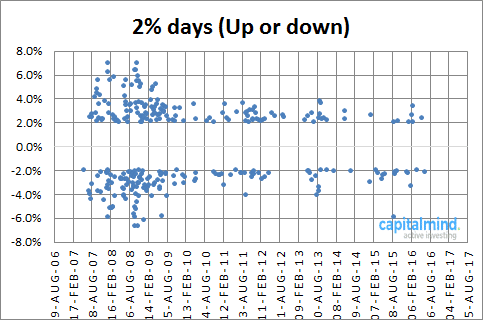 The market sell off today was more or less expected. With the 2% fall in the US indexes on Friday people have been spooked because of the following reasons:

This is very good for discussion over chai. But not much more than that. It’s better to react, not predict.  Here’s how the Nifty has moved: 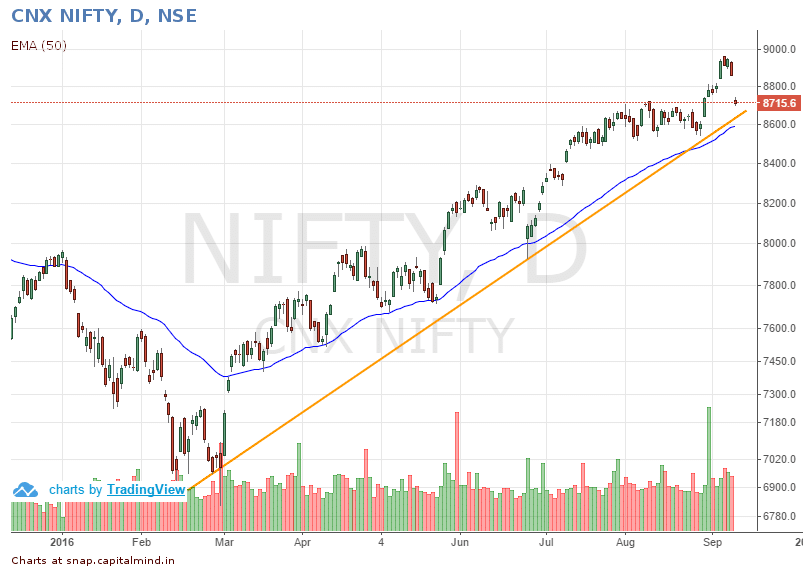 It hasn’t even reached below the trendline or below it’s 50 day moving average. In reality we are still higher than we were in August.
The 1.7% fall today has one big thing in its favour: it’s not a 2% decline. We haven’t seen too many days in which the index fell 2%, but the last was in Jun 2016. Even today’s fall isn’t that much, in context:

When you see it from this perpective, today’s fall was not that big a deal.

What to do when you see the index fall?

If you’re a momentum investor, you work the stop losses and figure out if you want to change them appropriately. Overall, looking at the Nifty chart above, if there will be a fall, it’s going to fall a long way. So you can readjust positions by either reducing the number of positions or reduce the size of each position. It’s simple: sell until you can sleep at night, reduce leverage and keep gunpowder ready to be able to attack the market later.
If you’re a person who has no idea what happened in the paragraph above, you should simply do nothing. Just do whatever you’ve been doing and when you can create the time, understand this stuff before panicking. Your portfolio cannot be hostage to an index and in any case, you’re probably still meeting yor longer term goals even with this fall (and if it were to fall another 5% more also)
As a rational person, you’re probably already aware that this is not a big enough fall to make the valuations juicy, or to make it seem like there is blood on the streets. Much about panic is manufactured for conversation, not for action. Don’t confuse the two.

But Gimme Conversation Stuff Also, No?

Yes, of course. I think the Fed has been testing the waters. Will the markets shake it off that we are looking to hike rates? If the answer is “the markets are spooked” then they will find an excuse to delay things till September.
In any case, LIBOR rates have been going up (Our Premium Post). European bond yields aer going up: the German 10 year “Bund” is now in positive yield territory at +0.049%, and the Portuguese 10 year is at 3.27%.  (Reuters)
The rate hike is already happening – if rates on LIBOR are up, then we will see borrowing costs for US Banks and corporates go up. Rates are inching up in Europe as well. (And similarly, rates are falling in India. We actually have interest rates in India. For much of Europe, at negative yields, there are only “Not-interested” rates)
But remember that all it will take is some US/ECB/BOJ official to come out and say “oh we were just kidding, low rates are here forever” etc. This is precisely how much there is in terms of the occupancy ratio of the tail with respect to the area between their legs. So then everything will go “Risk on” again and markets will go back up with a fury.
Trading’s off tomorrow.India reacts to inflation numbers (coming at 5:30 pm) and then to US market changes, only on Wednesday. There will be a lot more to talk about. But until there is some real change in fund flows or rate changes, we shouldn’t think of drastic action.