Jubiliant Foodworks crashed recently. It has seen a degrowth in  terms profits, margins, same store sales growth etc. And this is probably something markets expected, as the stock has nearly halved from its highs of 1953. (Current price: 1087)
The company franchises the Domino’s Pizza and Dunkin Donuts brands. The Q4 results show negative same stores sales growth , declining profits and slowing store count growth.

Same stores sales has plunged by 3.20%. The major reason the company has cited for this quarter is Ramzan and delayed product launches at the start of the quarter. The downtrend, however, is continuous, and this is the first time same store sales growth is negative since Jun 2014. There is stiff competition from other operators in same business, which ends up with higher concentration of outlets (Domino’s, Pizzahut and US Pizza) in a same area. For current quarter, Jubiliant Foodworks added only 23 new restaurants. The major focus was rather than opening more number of outlets, open fewer outlets which have high productivity.
But even with a lower new outlet number, their same store sales growth is negative. (with a high “new” outlet count, they can argue that most of the new outlets will take time to generate sales)
To further add to this, the management has gone for a lean working model by cutting two employees per outlet. The major reason management cited was, they were more productive with lower employees and in case growth (15-20%) is seen in terms of sales then it doesn’t take much time to add more employees.

Currently Jubiliant Foodworks has an outreach in 243 cities with 1062 restaurants as of  03 September 2016. Every year their would be 150 new addition of outlets, but for the current year the guidance has been cut down to 130-140 new outlets.

For Q1 FY16 44% of their delivery orders are sourced online . Along with their own online ordering app “Dominos Pizza”, more sales are being pushed by the food aggregators like Zomato, foodpanda, Swiggy, Tiny Owl etc. 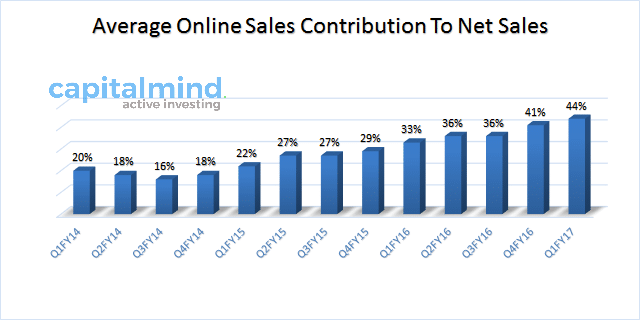 The graph is with respect to net delivery sales (where orders come either online or on the phone).
Same store sales should go up with higher online sales, since delivery orders don’t take up real estate (people don’t have to be seated and served). But they’re going down – and that’s part of the story.

Operating Margins are under serious pressure and are at a 3 year low at 9.50%. Operating margins are at severe stress due to drop in customers, coupled with higher maintenance of new infrastructure. Food inflation has been another factor for lower operating margins,though the management has brushed away the concerns. Rental costs have hurt too, and they see an increment of 5-6% on the rentals year on year.
The company is banking heavily on 7th pay commission, which might bring more liquid cash in the market to spend. Along with that good monsoons might boost up the spending capacity in semi urban areas and food inflation might come down. Their is also a new product lined up for the next quarter, which might stimulate the customers.

Dominoes, or pizzas really, used to be great to order for a match or a late night or such. But with prices through the roof it’s quite exorbitant to spend a massive Rs. 600 to Rs. 900 for a large pizza that barely feeds three people – and you pay 25% extra for taxes and other stuff.
Now there’s other options. In Bangalore alone, you can use an app like Zomato or Swiggy and order food from any number of restaurants and they will deliver it to you. Pizzas that are lower priced are quite as easily available, from the hand-tossed to the wood-fired to what not. Plus, there are now pure food startups, whose only job is to make food and deliver it to you – from thebhukkad to Freshmenu to others. There’s basically so much out there that is cheaper, healthier or tastier than the old-style Dominos that you have to wonder why it’s a surprise at all the Dominos is facing the heat.
In fact, even Reuters noted that startup apps have changed the game.
Unlike a cinema, eating a pizza is not an “experience”. It’s just junk food you eat, typically at home, or in an office. The ambience in their restaurants have zero additional value, unlike, say, a McDonald’s which has somehow figured out how to become a kid magnet.
In such a situation, a high price for a pizza where alternatives are available for a lot lesser, is simply not sustainable.
(You think it’s not high? A large pizza in India is 12 inches, which in the US would cost just $12 or so, which is Rs. 800. And those come with way more toppings than in India, and will cost you less. That’s how expensive they are!)
And this isn’t just Jubilant Food either – it’s also Yum! (which operates Pizza Hut/Taco bell/KFC) and Starbucks too. (EcoTimes)
Jubilant Foods had a dream run through its initial years, even after its IPO. At current revenues, their P/E is nearly 50, and the slowdown in revenues despite more online sales is telling us that the fast food chain might not be quite that fast anymore.
Disclosure: No positions.