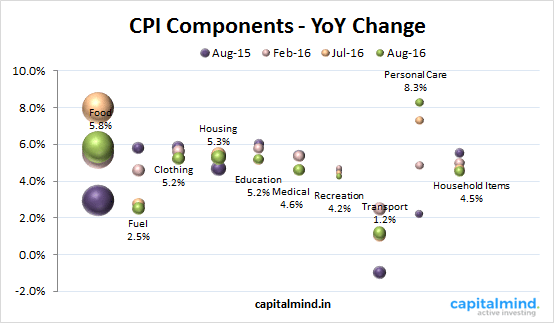 Consumer Price Inflation for August 2016 was a surprise – a low 5.05%! This is due to flattening food inflation and a higher base last year. 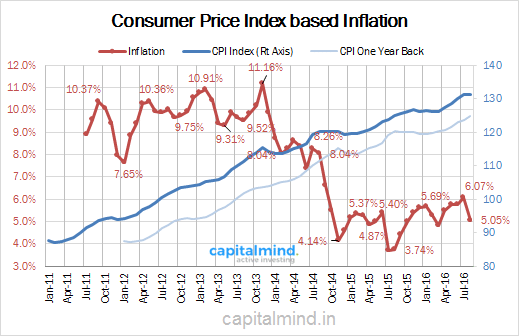 The biggest change was in Food – which dropped to 5.8% as prices of vegetables have fallen a lot (inflation in vegetables is just 1%). We wrote in August that prices of tomatoes fell to less than Rs. 10 per kg, and onions too had fallen to about those levels. Prices of Pulses, where inflation is still at +22%, will cool off once they harvest the current crop (where 40% more sowing area has been noted).
Personal care has shot up 8% but everything else seems to have cooled off.

If you look at inflation without food or fuel, it remains benign at 4.5%. This is a reasonable number to work with. 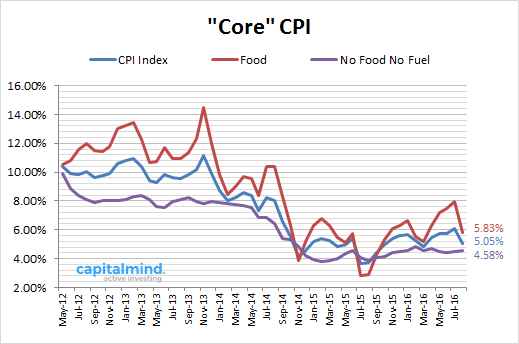 And finally the dip has been in both rural and urban inflation this time, which will be a relief. 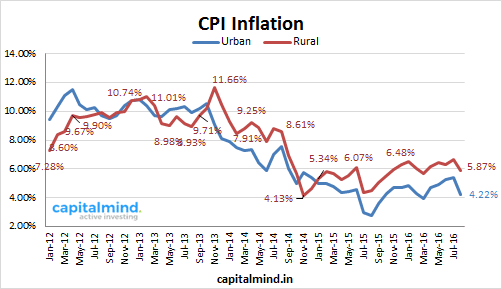 Our View: Rate Cut For Sure?

Will RBI Cut rates? It should do, since inflation seems to be under control at least at the secondary level. As prices cool off, we should see lower rates through the system. However, banks haven’t really been cutting rates very much. Even now a 1 year MCLR (the rate below which a bank will not lend for that tenure) is at least 9.1%. Their borrowing rates (for banks) have been falling dramatically, all the way down to 7% now. This is a pretty big difference between borrowing and minimum lending rates, and the RBI needs to work to bring that window down.
For many large corporates, the borrowing rates have been lowered by the bond market. (Reliance Jio is able to borrow for less than 1 year at less than 8%). This means they’ve already had the rate cut.
But it would be useful for RBI to signal its intentions and reduce rates. For other countries who are looking to raise rates, inflation would be welcome, but India’s at the opposite end, where our inflation has been a bother. This data, we believe is good enough for upto a 0.50% rate cut, and would be a good welcome by the new governor.