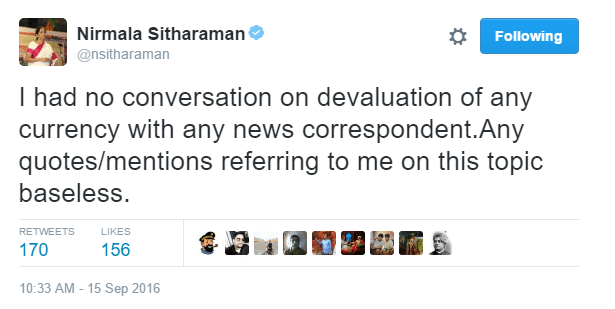 There’s some brouhaha that the Commerce Ministry wants to devalue the rupee somehow, and will recommend it in some fashion. The news has been denied by even the minister of commerce, Nirmala Sitharaman:

This is a rumour quoted as “some source” in the commerce ministry who “does not want to be named”.
Sources who do not want to be named can be figments of anyone’s imagination. And usually are. Which is why they are sources who don’t want to be named – they can’t be, they don’t exist.
There was a rumour a couple months back. Cogencis says “sources” tell them that IndusInd bank is buying Bharat Financial. I won’t even link to it. Because it never happened. It never was going to happen. Someone decided to place this rumour into the market, and Bharat Financial (Earlier SKSMICRO) went up to 900 and now has conveniently crashed to the 750 levels. This is really irresponsible especially when the companies themselves deny such things.
There is also a ton of other “press releases” that should be ignored: Read: If you want to do, do; Don’t say.

But Will The Rupee Be Devalued?

Most people will disregard what I said and ask this question anyway.
The answer is that no, it will not be “managed”.
The commerce ministry can’t devalue the rupee. Even the Finmin can’t do it. The commerce ministry can request the FinMin to ask the RBI to buy dollars like crazy, but that would be a little rich.
There is no easy way for us to “devalue” our currency – the only thing we can think about it is to let it slide. That would be possible if the rupee was sliding anyhow and we were doing something to stop it from falling. But in recent times, the opposite has been happening. Net of Gold, we have a current account surplus!
India’s trade deficit (Merchandise plus services) has been the lowest in a long time – of just $8 bn in the March 2016 quarter. And then, we have solid FII flows coming in that offset such a deficit. It’s all so much that the RBI actually buys dollars to keep the rupee from appreciating – and that’s why our “reserves” are going up consistently. We aren’t letting the rupee slide – in reality the RBI is not letting it appreciate.

Can RBI Let The Rupee Slide?

Possibly, if there is a sudden demand for the dollar – either because foreigners are leaving our markets, or because some imports went up big time, like crude or gold) then there may be a fall in the rupee due to lower demand compared to the dollar. Now the RBI usually steps in at such extreme times and sells some of its reserves, in order to control volatility.
I suppose we could engineer a fall in the rupee by allowing it to fall in such a circumstance. But this isn’t happening right now. So it would be a strange request if anything atall.
Or that we could have the RBI go buy dollars big time and print rupees to pay for it. But that will lead to a very bad consequence: inflation. When you print too many rupees, you will find that inflation is a problem – and given how big that is for India, RBI won’t do it.

There’s some drama in the western markets and rates seem to be rising rapidly for corporates. This, if it exacerbates, might result in the rupee falling somewhat. Plus we have these massive FCNR redemptions coming up in November, and there is a potential pressure on the rupee right now. The structure of these redemptions are such that RBI’s intervention will not matter that much – in all probabiilty we will see volatility anyhow.
But if we devalue it won’t be because the commerce ministry wants it. Even the FinMin won’t matter. The RBI decides whether or not to intervene in an otherwise functioning market, and while it may be more comfortable to let the rupee lower a little, it makes no sense for any one to force a devaluation.
Don’t believe rumours. It’s usually non-sense. The rupee unfortunately fell on this piece of news, and then recovered a little. But the damage has been done:

Perhaps the next step is to claim credit for the devaluation that would have happened anyhow.