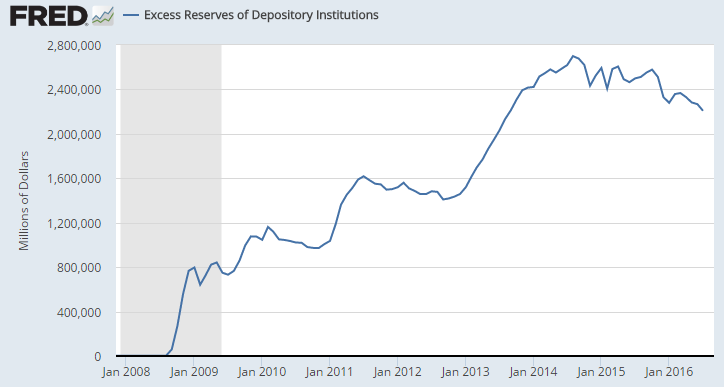 Janet Yellen is never going to raise the fed rate, it seems. The language these bankers are using is so hedged that you wonder why they even say anything at all until they finally do something.
But this time the speech is a little less dovish than it used to be.

U.S. economic activity continues to expand, led by solid growth in household spending. But business investment remains soft and subdued foreign demand and the appreciation of the dollar since mid-2014 continue to restrain exports. While economic growth has not been rapid, it has been sufficient to generate further improvement in the labor market. Smoothing through the monthly ups and downs, job gains averaged 190,000 per month over the past three months. Although the unemployment rate has remained fairly steady this year, near 5 percent, broader measures of labor utilization have improved. Inflation has continued to run below the FOMC’s objective of 2 percent, reflecting in part the transitory effects of earlier declines in energy and import prices.
Looking ahead, the FOMC expects moderate growth in real gross domestic product (GDP), additional strengthening in the labor market, and inflation rising to 2 percent over the next few years. Based on this economic outlook, the FOMC continues to anticipate that gradual increases in the federal funds rate will be appropriate over time to achieve and sustain employment and inflation near our statutory objectives. Indeed, in light of the continued solid performance of the labor market and our outlook for economic activity and inflation, I believe the case for an increase in the federal funds rate has strengthened in recent months. Of course, our decisions always depend on the degree to which incoming data continues to confirm the Committee’s outlook.

The Fed funds rate is at 0.25% to 0.5% which was last increased in December 2015.
One thing to note is that bank excess reserves are falling, and falling slowly. When banks have too much money at hand and they haven’t lent it out (at which time they would need some “regular” reserves to be maintained with the Fed) they have to keep the extra money back with the Fed as excess reserves. The Fed pays interest on this.
This is like India’s “reverse repo” where banks keep excess money back with the RBI.
From 2008, excess reserves just kept going up, with the 3 QEs. Remember, the fed would buy bonds and pay the banks. The banks would now have excess money and were zombie enough not to lend out money. They pretty much stuffed reserves back in o the Fed.
And once QE stopped, the excess reserve buildup stopped too. And now, as the economy improved, the Fed started to take out excess reserves (some converted to regular reserves as credit improved etc.) and the excess reserves amount has been coming down. It dipped to a recent low in December 2015, and has now fallen to yet another low.

This might be telling us a story. As reserves are falling, the Fed is effectively signalling a hike in rates as they let reserves drop too. Why? Because a drop in excess reserves means that effectively they are going out of the system slowly, and only the Fed can engineer that. If the Fed is overseeing a drop in reserves, then it’s akin to “tightening” – in the sense that rates will also go up due to that, naturally. (Consider this – a drop in reserves means lesser money in total, and lesser money will put upward pressure on market rates) Also the Fed currently reinvests all the interest and principal repayments they get on the investments, but at some time they will drop that too – perhaps after they start continuously increasing rates.
Will the Fed hike rates? We think so. It’s quite likely in September going by the language. And the drop in excess reserves is probably telling us the rate hike happens sooner than later.