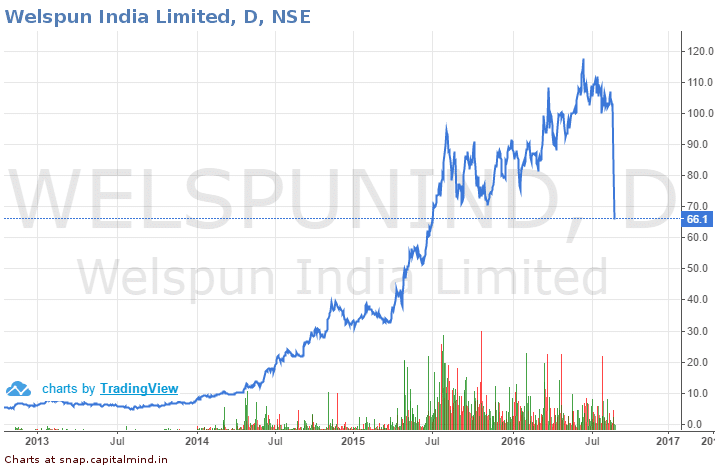 Welspun gets into even more trouble now. After Target terminated its decade plus relationship with Welspun, the stock tanked 20%. And then, in their conference call they revealed that the mistake was theirs, and they have also shipped more sheets to other customers. So this wasn’t the end of the finger pointing.
Walmart, another big customer, has now said they will also investigate into such claims.

Wal-Mart Stores Inc.  has announced to review its merchandise procured from a major textile supplier after its rival Target Corporation also severs ties. The company says that it is analyzing Welspun India Ltd.’s cotton certification records after Target pulled back all its cotton sheets over Egyptian cotton dispute. Target had claimed that the supplier sent counterfeit Egyptian cotton sheets.

Wal-Mart has now joined its competitor in scrutinizing Welspun over concerns that the Indian textile manufacturing giant may have sent in cheaper bed sheets that it marketed and passed off as premium Egyptian version. The longer fiber cotton dubbed as Egyptian forms a softer thread compared to other types of cotton. It is also sold at a much higher price, owing to its premium status and higher quality.
The retail giant has plans to undertake further talks with the supplier to see how it can handle any issues discovered appropriately. While Target is the second largest customer for Welspun, Wal-Mart happens to be the third largest.

Oh, this further sucks. Because Walmart is massive. If they blacklist or reject welspun, it’s going to be difficult to get contracts from other textile buyers!
And the biggest customer, Bed Bath and Beyond, has yet to confirm whether it too will investigate any claims. That would be a further knock.
The stock is down 36% in two days, and clearly, investors aren’t forgiving of such activities. You can’t lose one of your top three customers on quality issues, and then see the other companies in those top 3 further investigate the situation. This is a complete PR Mess for Welspun, apart from the actual mess of losing key customers.

The stock’s going to see selling until holders have exhausted their selling. It may still be a rebound pick then!

This is damning – first they lost a full customer after it was found they provided sheets with a wrong or inferior form of cotton. Second, other customers have gotten suspicious. This doesn’t bode well for the stock.
There will be a bottom of course. But it’s better to wait for the knife to fall to the ground before picking it up! Catching them on the way down isn’t very healthy. We don’t recommend or own this stock at the moment.