MBL Infra’s been falling. And falling hard. The stock is at its lower circuit today at -20%, and while there are a lot of questions about this, let’s highlight one issue: Promoter pledging. First, the stock chart: 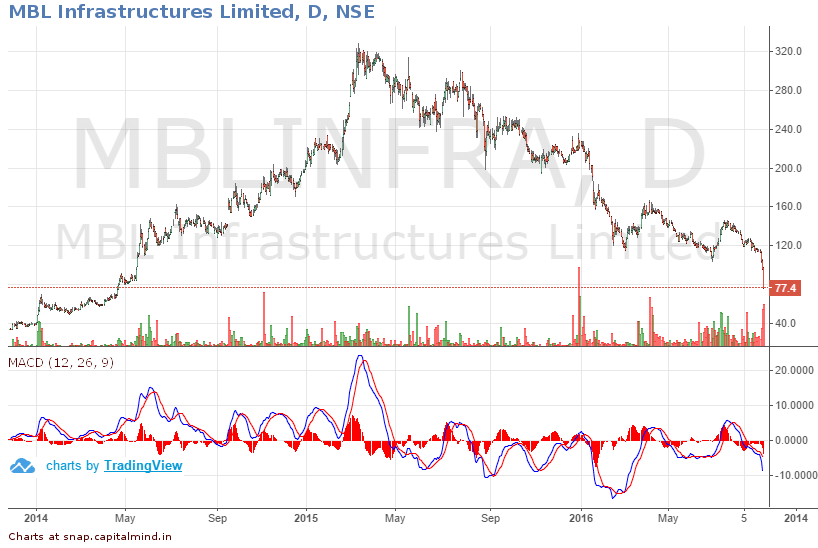 The stock’s fallen to 1/4th its price at the high in May 2015, and has been steadily falling. The company builds roads and other infrastructure projects, and recently stated that it won orders worth 779 cr. from NHAI, 2,000 cr. in UP, and so on. In fact, they got 3,000 cr. of orders in Q4 of 2016.
And yet, the market cap of the company is now at 300 crores. That is like a P/E of 4. Why is it down so much?
Correct answer: We don’t know yet.
However, the issue seems to be: promoter pledging. The promoters recently increased their stake in the company by about 9 lakh shares (around 2%) by buying shares in the market. And they have apparently been pledging a massive amount of shares to lenders – and this is probably against shares they have bought.
MBL Infra has about 4 cr. shares outstanding. Promoters own about 2 cr. shares. (Around 49%) But that might not last too long.
See how the pledged shares have increased: 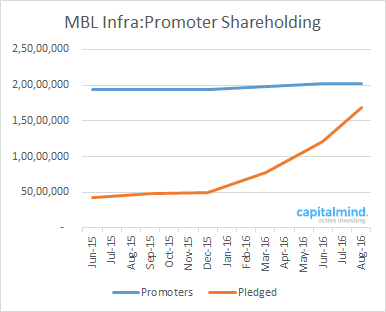 Now there is nearly 83% of promoter shares pledged (from 22% last year).

When you have this much promoter pledging, any blip in the stock creates a wave of selling. When the stock falls, the lenders ask the promoters to put more shares down as collateral (since they will usually fund about 50% to 60% of a share’s market value). When even that isn’t enough, they will just sell shares in the market to recover their money.
This is what seems to be happening here – as lenders seem to be selling hard. And that has made the stock hit a circuit down already.
When such selling happens, the promoter’s stake will fall. At some level, the promoter has little control over the company, and owning a low stake doesn’t incentivize them too much. Small infra companies are very promoter dependant, as they depend on the relationships of the promoters to get large projects – essentially, without the promoter, there’s not that much of a business.
Promoters own 49% of the company. Even if half the pledged shares are sold, their shareholding will fall to 24%. 24% is not enough unless the company is huge and very professionally run, and MBL Infra hasn’t yet reached there (in my opinion).
Which means:

How do you find such problems? Answer: it’s not easy.
Just looking at stocks with high promoter pledging doesn’t mean anything – some stocks have that for ages. Looking at news doesn’t help – there wasn’t any adverse news in this stock. Perhaps a strong uptrend confirmation helps – if a stock is in a long term downtrend, you just don’t stay a buyer. But it’s not easy, everyone will find himself owning one such stock at some point in their lives.
The perils of promoter pledging are that stocks, when they fall, they fall much bigger due to the selling spiral. Not all companies are fundamentally bad, but such spirals can kill the stock price. The single question must be: why is the promoter pledging so much of his stock? Why wouldn’t he find the liquidity to pay off the lenders in some other way? Until such questions are answered, the stock will stay under pressure.
There’s an asymmetry of information in the markets. The sellers, who are likely to be ones holding shares as collateral, know more than you or I do. And that’s showing.