Welspun India is down 20% on its lower circuit today. That’s because Target, it’s second largest customer, terminated its relationship because:

(See full Target press release)
Welspun gets some 10% of revenue from Target, who has been its customer for more than a decade. The 10,000 cr. market cap company is the largest producer of Terry towels in Asia, and even supplies to Wimbledon. It also makes Sheets and Pillowcases. They traded at a P/E of about 14 on a very high Return on Equity of about 20%, where they have been growing EPS by about 20%.

Welspun has been accused of using Non-Egyptian cotton in sheets that were sold as Egyptian cotton based. Now to a regular bedsheet user, the difference may not be apparent. Egyptian cotton is very long staple, which tends to indicate higher quality. If you just “long” versus “extra long” staple, you might not really make out the difference in a sheet. And it’s quite likely that in terms of actual quality delivered, the product performs just well. But that’s not the point. You can get a shoe for Rs. 800 that gives you the exact same feel, grip and durability as a Reebok shoe that costs Rs. 6,000 – but this cannot be the excuse to sell it as a Reebok.
And therein lies the rub. Welspun had been selling Target its products for many years, but the sheets it sold to Target as “Egyptian cotton” sheets between 2014 and 2016 were apparently not from Egyptian cotton, but from some other kind of cotton. Ticked off by this, Target has taken out the entire relationship : not just sheets, but everything.
This hits Welspun with multiple pieces:

In all of this, Welspun has only offered to get its supply processes audited by an external auditor. 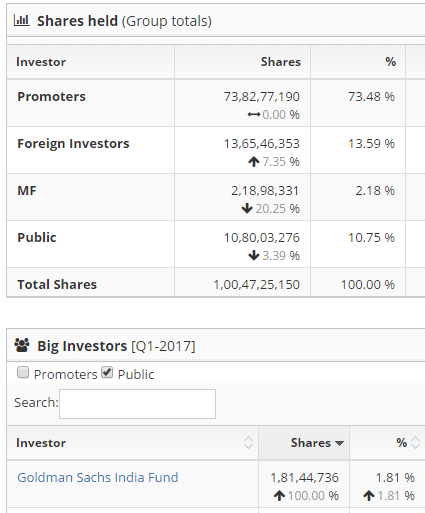 This means the folks that lost 2,000 cr. in market cap today were mostly the promoters, and then foreign investors.

The shares should fall until those folks selling 2.2 crore shares – on the sell side today – get their fills. The share now has fallen to Rs. 86, but at this point there is so much uncertainty about revenues that it’s best to avoid conjecture. Wait till their biggest customer – Bed, Bath and Beyond – has announced what they will do.
In general, customers don’t terminate relationships easily. It can take many years to build a good supplier relationship – process feedback, integrations, technology and quality control metrics aren’t set up overnight. So the fact that this relationship was terminated now probably indicates a point of no-return in discussions between the two parties, so much that they were willing to let all that investment go down the drain. And, given that they have now said this statement publicly, Target will not be able to justify re-hiring Welspun at least any time in the next decade. That’s one customer that stays lost.
Finally, shareholders can’t really cry fraud yet. The external auditor might find that a supplier to them substituted the cotton. Or that somehow this switch was done without the knowledge of management. Of a slew of other reasons, or excuses, to pass the blame on. But there’s only one loser here: the shareholder of Welspun India.

We have been shareholders of this company in a time gone by. In our momentum portfolio, where we exit when momentum is lost, we had made a reasonable return from Rs. 550 to Rs. 845 last year (this was before the 1:10 split). But this is the kind of thing we simply did not expect. Make no mistake – we left because of the lack of momentum, not because we detected anything shady. But at this time, because of what’s happened, we wouldn’t go near this stock at this price.
One thing that could have been an issue: the Egyptian crisis. After the Army took over in 2013, Egypt has been in more turmoil and perhaps sourcing was an issue. It’s quite likely that supply issues were escalated at the point, and at some point a bad decision was taken to replace Egyptian cotton with, well, non-Egyptian cotton. The responsibility may lie outside Welspun, or within it – we don’t know – but there’s one thing for sure: the impact will be felt by Welspun.
What’s likely to happen over the next few quarters is that more Indian companies will go through extreme scrutiny. We have other textile players too – in fact, India is one of the biggest textile exporters to the US. And many are listed – from the massive Arvind, to the tiny and upcoming Nandan Denim. Some export, some contract, and others have only parts that do yarn, fabrics or garments. Let’s hope this is an isolated story, otherwise this business will go down the Pharma/FDA way where all the surprises are only negative.
Disclosure: No positions.