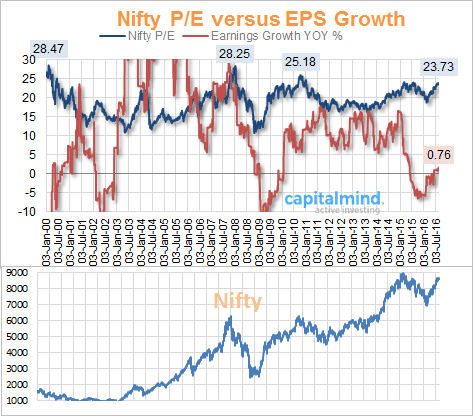 We’ve been asked about Nifty P/E ratios – the Price to Earnings Ratio – which is a graph we often publish. In June we wrote about how the Nifty consolidated P/E was at 20, while earnings grew only 0.71%. Earlier this month, we wrote about the Nifty Madcaps – the Midcap Index was at 34 P/E while earnings didn’t grow, but contracted 24%.
And now, for the end-August figures, as about 41 of the Nifty companies have announced results. Things still suck – with the P/E at nearly 24, while the Earnings have grown a minuscule 0.76%.

Is This Nifty P/E Too High?

Sure, last year was bad, you think. Very bad. In a year when the GDP grew at the fastest rate in nearly all of the world, our companies were in horrible shape. Accepted.
Well, let’s do things another way. Let’s take the 10 year average earnings growth. We couldn’t have been horrible in 10 years, no? We saw 9% GDP growth in the middle, and maybe some hiccups in 2009, but really, India was out there and shining. What’s the Nifty’s 10 year Earnings growth like?
Answer: Just 7.4% per year. 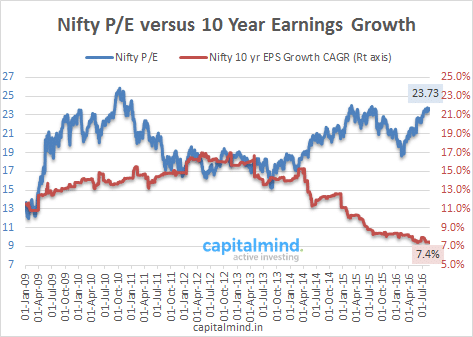 You might say oh, wait, haven’t the Nifty constituent companies changed, etc.? They have but that doesn’t matter. Why? Because the Nifty is simply India’s top companies, by market cap. Meaning, we always take the top of the cream, the companies that have floated to the top. We aren’t comparing the earnings of JP Associates today (which was in the Nifty in the past and whose earnings have died). We are taking the strongest companies out there – like Eicher today, which weren’t in the Index earlier, or a Vedanta, which used to be a Nifty company when it was a strong company.  So when you average it all out, the earnings growth is comparable, just like the Nifty itself is comparable to its past. And therefore, the P/E ratio too is worth comparing.
Essentially, we have been given a very high premium. Our growth is just not adding up. Sure everything could change soon and a miracle could happen. But just like we have been overpaid for our lack of growth, we could in the future be underpaid for high growth.
Hope is not a strategy, but it’s worked so far. The world has been running on fumes and the steroids of cheap money, so why shouldn’t we? But at Capital Mind, we think it’s better to dance knowing that the music player is running on rechargeable batteries. That way, when it stops in sheer exhaustion, you don’t have to be surprised.
Quick Note: The Price to Earnings Ratio or the P/E ratio is simply the market capitalization of a company divided by its net profits. So, in a way, it’s the Profit Multiple that you pay to buy a company. What profit multiple is good? The correct answer is: it depends. We like to use a simple metric – you want to pay a P/E of 15 if the company is growing profits by more than 15% a year. These don’t necessarily work for stocks like FMCG stocks where people are happy to pay a P/E of 35 even if the earnings growth is just 10%, but those tend to be exceptions.
Indexes are just bunches of stocks. So these sector specific madnesses should even themselves out and you should see a semblance of “averaging out” of earnings and P/E. If we add up all the profits of the index companies and divide the total stock market capitalization by that sum, we will get an Index P/E. NSE publishes the standalone Nifty P/E every day, and BSE uses consolidated numbers. We present the NSE numbers here.