Rain or no rain, food prices only seem to be going up. In July High food prices took inflation to more than 6%, the highest in nearly two years. This also shows that the slope of inflation continues to be going up (dark blue line below) and strongly so. 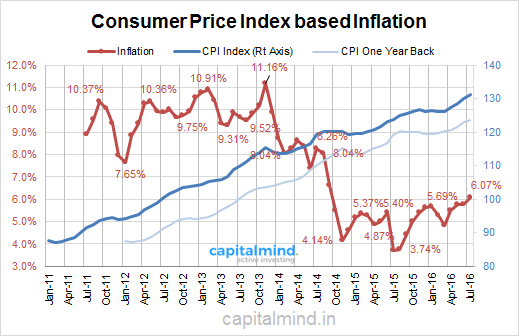 The component check shows that food is the biggest culprit at 8%. But housing has also gone up after the change in the salaries of public sector employees (which is factored into the housing component of the CPI through their housing rent allowances).
Fuel is at a low of less than 3%. Core CPI – that is, without including food or fuel – is still reasonable at 4.5%. However since food and fuel are such a big part of the Indian consumption basket, the concerns of inflation in the food component trump everything else. 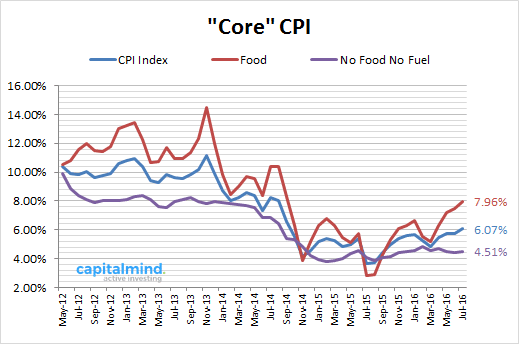 Our View on Inflation in July

Of course this eliminates chances of big rate cuts, because the government and RBI have n inflation target of 4% with a 2% buffer on both sides. This data now breaches that upper limit of 6%, so there has to be a strong effort to curb the rise in food prices.
Within food, the biggest changes are in Sugar (22% inflation), Pulses (27%), Vegetables (14%) and Egg (9%). Sugar prices continue to be at a high, and Pulses prices may only reduce in three months.
We believe there could be an element of sugar price control (since the government controls a lot of the industry through regulation). Pulses and Egg reflect the shift from the carbohydrate heavy diets to more focus on protein, and supply isn’t being massaged appropriately. We should expect more action here too. Overall, a disappointing number but hopefully, will instigate action within the authorities.