PVR is India’s largest multiplex chain with over 500 screens and interesting data release from a related source tells us this might be a very good quarter for the company.

June 2015 was a great quarter for the company, and matching that would have been quite difficult. A lower than expected turnout for Shahrukh Khan’s movie FAN dented the company hopes of a better Q1 but Disney’s fictional character Mowgli came to its rescue with the Jungle Book.

The movie released on 8-Apr-16, a week ahead of the US to clock in an awesome over 220 crore in revenue making this the highest grossing Hollywood movie.

Numbers have come in from a Network 18 subsidiary, Book my show (BMS). This gives us an insight into potential earnings from the movie by PVR. Till recently, BMS was the exclusive seller of tickets for PVR. BMS sold 49.3 lakh tickets contributing over 44% of Disney’s Jungle Book in India. This translated into an easy revenue of over Rs. 100 crore for BMS.

Let’s assume that BMS does movie bookings for other movies too, and that PVR is only half its total business. Also, PVR gets walk-ins too. It also gets bookings via it’s own app. So by this yardstick, PVR would have about the same number of tickets – 50 lakh – for Jungle book.

PVR’s average ticket price is around Rs. 190 (India wide) which means there’s a revenue of about Rs. 100 cr. from tickets alone. Update: After entertainment tax the net revenue to PVR is likely to be lower, probably at the 70 cr. level. In the past, they have shown that net box office is about 30% lower than gross, due to entertainment taxes.

In their conference call, the management said Jungle Book is their third highest grossing film ever, for Hollywood and Bollywood combined.

Hollywood films roughly contribute 30% to the company’s revenue and Q1’s line up of Kung Fu Panda, Jungle Book, Captain America: Civil War and Finding Dory would have increased this contribution to a major figure.

People don’t just buy tickets, they also buy food and beverages. They’re expensive. And at about 38% of ticket prices, they get about Rs. 72 per person. For 50 lakh tickets that translates to another Rs. 35 cr. in F&B revenue.

PVR made about Rs. 486 cr. of revenue in the March quarter. One movie – Jungle book – contributes Rs. 100 cr. or so for the June quarter, and there are many others out there. BMS numbers are telling us that PVR might actually have a record quarter in Q1.

The stock has done well in the last year:

What do we see ahead?

Well, the government’s positive move over shops being allowed to remain open 24×7, is an added bonus. While the short term gains may not be that high, from a long term point this is a bonus since the company can run shows for longer durations during the peak season.

With some major moves such as the app overhaul, expansion to Tier 2 and Tier 3 cities, improving the in cinema experience and more PVR has a solid story going ahead. These charts show the lead PVR maintains over its closest rival. 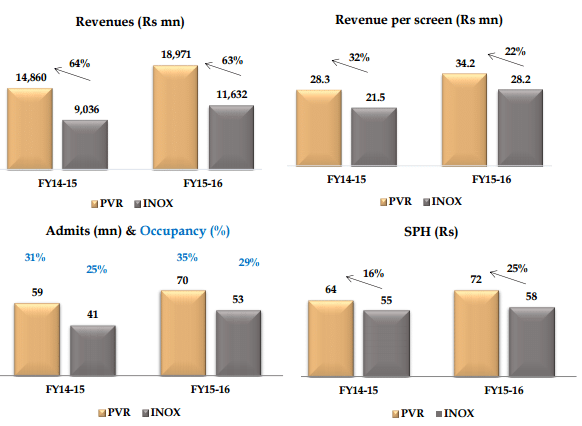 The company already has a better line up for Q2 and Q3 which we just saw with Sultan and the upcoming Rustom and Mohenjo Daro. This is going to be an interesting time ahead indeed!

Disclosure: This stock is part of a Capital Mind Portfolio.