Narendra Modi’s `Make in India’ initiative brings in over $100 billion dollars since the launch back in September, 2014.

The `Make in India’ initiative was launched with the aim of promoting India as an important investment destination and a global hub for manufacturing, design, and innovation. 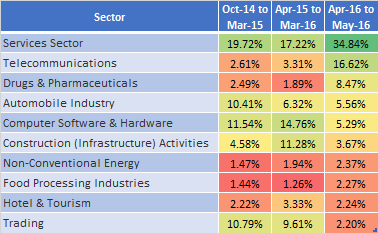 Here is the sectoral breakup of which Industry garnered the most of the FDI Equity Inflow. This data is not available company wise due to the absence of a central database. Source: PIB Press Release